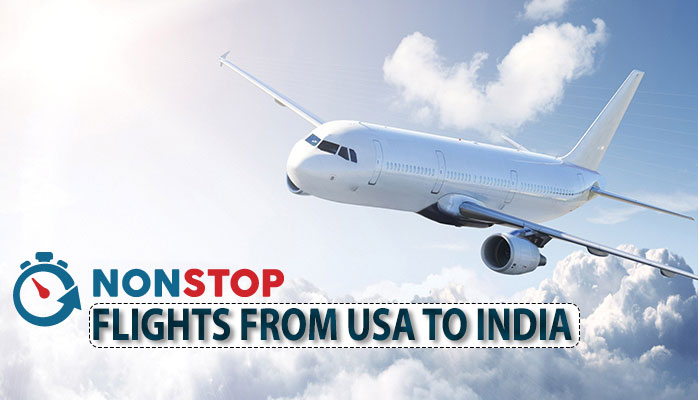 Booking non stop flights from USA to India has a lot of advantages. Along the years, we have seen the demand has been constantly increasing for these flights. Moreover, top international flight carriers vie with each other on these non-stop routes. The non stop flight operations depend a lot on demand and supply criteria. As a matter of fact, the Indian Diaspora in the USA is considerably thriving. It’s a matter of immense pride that Indians have attained some top posts at the international level. We see a lot of CEOs of top multinational organizations being Indians.

On the other hand, so many of these people living in the USA usually travel back to India. After all, it’s their homeland and it certainly gives them a sense of belonging. Most of these people go for the non-stop flights to India for the purpose of visiting their homeland. However, many people don’t have clarity about some factors associated with these flights. For instance, the number of flights, the airlines that operate them and so on!

The Indian diaspora in the USA, is one of the major contributors for flight tickets bookings to India. Flydealfare brings a complete list of flights operating between USA and India. Read on to know everything about the updated list of non-stop flights to India from USA.

Here’s a Complete List of Non Stop Flights from USA to India:

Out of these 16 non-stop flights from USA to India, 9 flights are being operated by Air India and 5 by United Airlines. Besides that, Delta and American Airlines both operate one flight each.

Air India is the national carrier of India. Moreover, it has been at the forefront of operating direct flights from USA to India and back. The airline operates from almost all the major airports of USA. Being the first one, Air India captured a huge market share for non-stop flights to India from USA. After Air India many other airlines followed suit. They also started their non-stop flights from USA to India.

The first non-stop flight from USA to India by Air India was launched in December 2015. It thus began it’s operations on the San Francisco to Delhi route. This nonstop flight reduced the travel time between USA and India to 15 h 55m by saving 6 hours. Air India flight reached San Francisco for the first time. As a result, airport towers at SFO were illuminated with Indian flag colors.

Chicago is one of the prominent cities of USA and Delhi is the capital city of India. Air India took the initiative to connect these two cities by starting direct flights. The direct flight to India from USA records 14h 35m as travel time.

In July 2017, Air India achieved another milestone by launching non-stop flights from Washington to Delhi. Delhi being the capital city of India sees a huge footfall from travelers from USA. It’s also the only airline operating from Washington; Air India has captured a big market there.

Being the national carrier of India, Air India carries major flight operations. It indeed has the privilege of flying to almost all the major airports of the USA. In 2018, Air India officially launched its non-stop flights to New York from Delhi.

Air India has also began its flights from Newark to Delhi. United Airlines is already operating on this route and now there is a stiff competition between these two airlines.

From December 2018, Air India began flights from New York to Mumbai and back thrice a week.

In January 2021, Air India launched non-stop flights from Chicago to Hyderabad. The India flight operates every Wednesday and the return flight on Fridays.

United Airlines put a stiff competition for Air India. It began its non-stop flight from Newark to Delhi and completed the journey in 14h 20m. Despite this Air India is the first choice for India bound travelers.

The non-stop flight from San Francisco to Bangalore is the latest route announced by United Airlines. It was supposed to be operational from May 2021, but due to COVID 19 restrictions, it got delayed and now it will go live by May 2022.

What’s in the Future?

With India emerging as a big market, many airlines want to grab the opportunity. They look forward to offer new flights from USA to India. Flights from New York to Delhi, Washington to Delhi flights and flights to Bangalore are already available. Albeit, there are plenty of other Indian destinations which need to be covered that will prove beneficial. To sum up, we can say that there are only two big cities in India who are a part of these non-stop flight operations from USA.

American Airlines will start the nonstop flight operations on the Seattle to Bangalore route in 2022. Likewise, they were to begin these operations in February 2022. But as we all know, due to the covid-19 pandemic they too were curtailed. However, it’s very likely that we will see them starting soon in the second half of 2022.

Presently, there are 16 non-stop flights to India from USA. However, we are likely to see more of these flight operations to start somewhere in the future. It is a fact that the demand and supply criterion plays a major role in non-stop flight operations. The airlines start these flights only when they firmly believe that it’s propitious for them to do so. In conclusion we can also say that these flights prove very advantageous for the passengers. In fact, they save a lot of their time. Apart from that, there are certain other positive factors related to the non-stop flights.

For instance, passengers are able to circumvent most of the hassles associated with connecting flights. That’s a reason they are the most sought after flights by people. We hope this article about non stop flight operations between India and USA will prove helpful. For any other information related to international air travel, you can get in touch with us. We also provide the best USA to India flight deals for our customers. Flydealfare is a one stop solution for all your travel needs between the USA and India.

2.> What is the average travel time to India from USA?
The direct flight from USA to India takes around 14 to 16 hours depending on the route. On the other hand indirect flights take an extra 7 to 8 hours.

4.> Are non-stop flights from India to USA available?
Yes, all the airlines which are currently operating direct flights from USA to India have return flights to USA from India.

5.> What are the major airlines that fly from USA to India?