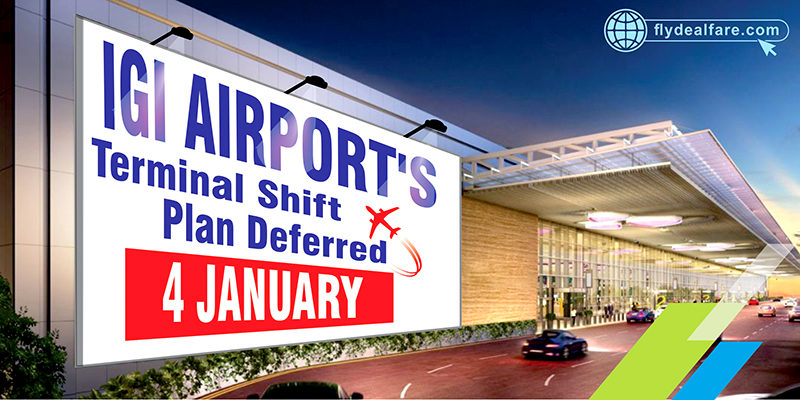 New Delhi: There is a major relief for domestic flyers of IndiGo and SpiceJet who are traveling to and from Delhi. The airline has planned to shift one-third of these two airlines’ flights from Terminal 1 to Terminal 2 from October 29 which has now been deferred to January 4.

Well, for now; all domestic operations of IndiGo and SpiceJet will continue from Terminal 1. On the other hand, the operations of all GoAir flights will take place from IGI Airport’s T2 from Sunday.

On the same issue, Aditya Ghosh (IndiGo President) has continuously stated that this partial shifting of domestic flights will lead to a lot of problems for flyers. Passengers can turn up at the wrong terminal and will have to rush to the other one to catch their flights.

As a result, R N Choubey (aviation secretary) has requested the airport operator DIAL to postpone shifting for some time and find a solution in order to ensure passengers don’t suffer. He also stated to Times Of India that attempts are on to find a suitable solution which will be acceptable by the airlines as well as by the airport.

Basically, the idea is to avoid partial shifting of domestic flights of any airline between two terminals in Delhi. But the airlines like IndiGo and SpiceJet don’t find the idea cool and oppose the decision. To which, both the airlines and DIAL is trying to find a solution.

Pradeep Panicker (DIAL’s chief commercial officer) has written to Ghosh that the official of IndiGo Airlines has asked for more time to shift operations to T2. To which the date has been postponed to January 4, 2018 which was 29th of October earlier. IndiGo operates its flights to and from Mumbai, Kolkata and Bengaluru shall be from T2 only.

He added that DIAL has given eight months to IndiGo, SpiceJet, and GoAir to decide on shifting flights among themselves. As the combined fleet of SpiceJet and GoAir is less than IndiGo’s (almost 150 planes), hence the airport operator’s original proposal was to shift these two to T2.

SpiceJet has stated that it will definitely shift to Terminal 1 only if all the three low-cost carriers were shifted.

On the other hand, IndiGo told DIAL that it will shift its domestic operations fully to T2 if the airport operator can enhance the passenger-handling capacity of that 1982 Asiad-era terminal. Right now, it is suggested that DIAL should shift SpiceJet and GoAir to T2 and later move them back to T1, and shift IndiGo to Terminal 2.

Anyhow, due to this postpone, DIAL’s plan to begin expansion work on Terminal 1 gets further delayed.