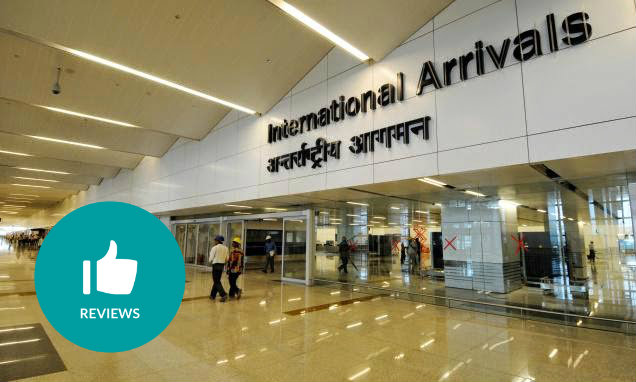 Indira Gandhi International Airport or IGI Airport is located in Palam which is 15 km southwest of New Delhi railway station. Named after the 1st Women Prime Minister of India, the airport supports more than 40 million of passengers in a year. Spread over an area of 5,106 acres, the airport becomes India’s and South Asia’s largest aviation hub. The airport has won the awards for The ‘Best Airport in Central Asia/India’ and ‘Best Airport Staff in Central Asia/India’ at the Skytrax World Airport Awards in the year 2015.

The best way to know about the services of any airport is to getting in connect with previous customers or passengers; which you can easily do by checking the reviews of Indira Gandhi International Airport. The Airport supports 80 different airlines to several destinations for numerous Indian carriers including Air India, Air India Regional, IndiGo, Jet Airways, SpiceJet, GoAir, and Vistara.

Whether it is related to the sleeping facility at Delhi domestic airport or eating or shopping, the airport delivers a lot to its customers.

Initially, the airport was operated by the Indian Air Force and after that its management was transferred to the Airports Authority of India.

The Indira Gandhi International Airport is a major hub of various Indian carriers such as Air India, SpiceJet, Jet Airways, Vistara, IndiGo, and GoAir. Approximately, more than 80 airlines serve this airport. Currently, there are two active scheduled passenger terminals along with a Hajj terminal and a cargo terminal.

Here we are discussing the Indira Gandhi Airport terminals in brief:

The terminal 1 at IGI supports the low-cost carriers such as IndiGo, SpiceJet, and GoAir. DIAL is planning to expand the Terminal 1 and enhance its annual passenger handling capacity from the 18 million to 30 million by the ending of the year 2022.

Being built in the late 1980s, the terminal 1A cater Indian Airlines. The terminal was used by Air India for its Airbus operations. However, the terminal is closed now and is expected to be torn down when the newer terminals are formed.

This terminal is only used for domestic arrivals. A newly expanded greeting area has been upgraded at the terminal along with a larger luggage reclaim area with 8 belts.

With a total floor space of 53,000 m2, the terminal 1D is the newly built domestic departure terminal. It has a total capacity of handling more than 15 million passengers per year. Indira Gandhi Airport terminal 1d has 72 Common Use Terminal Equipment which consists of 16 self-check-in counters and 16 security channels too.

Opened in the near 1986, the Terminal 2 was built at a cost of $950 million. Initially, the terminal was used for International flights but after that its operations shifted to T3. Nowadays, the terminal remains dormant for most of the time in a year; used for special operations only.

Indira Gandhi International Airport Terminal 3 is a two-tier building which is spread over an area of 20 acres. The lower floor of the terminal is being used as arrivals area and the upper floor as the departures area. The terminal supports 168 check-in counters, 95 immigration counters with 15 X-ray screening areas and much more facilities. The terminal was inaugurated on 3 July 2010 after which all the international airlines shifted their operations to this new terminal. Talking about the Delhi airport baggage services, there are 14 baggage carousels in the Indira Gandhi International airport arrivals area.

The domestic airlines which are operated from the Terminal 3 are Air India, the national carrier; and Jet Airways. The Tata & Singapore Airlines airline joint-venture Vistara is also operated from this terminal only.

The terminals 4, 5 and 6 will be built in future which will be triggered by growth in traffic and after the completion; all the operations of international flights will be a move to these three new terminals. As per the Delhi International Airport Limited (DIAL), the formation of these new terminals will increase the airport’s annual passenger volume capacity to 100 million.

Being located at a distance of 1 km from T3, the cargo terminal handles all the cargo operations at the airport. The cargo operations of IGI Airport received “e-Asia 2007” award in the year 2007 for “Implementation of e-Commerce / Electronic Data Interchange in Air Cargo Sector.” 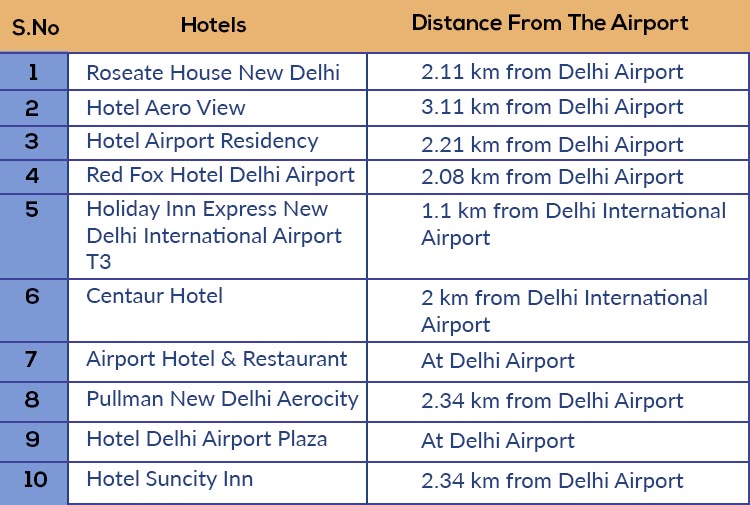 You can avail the following ATM facilities at IGI Airport:

Being located at check-in of the terminal 3, the “Pet Fly” is one of the unique platform to come up at IGI Airport, New Delhi to have pet-related all the services like handling of departing and arriving pets; Pet freshening needs, refilling the water bowls; arranging pet travel accessories like kennel, food, water, and attending their medical requirements if required.

Passengers can find the facility of foreign exchange at the following locations of IGI:

Multiple passengers can enjoy and spend their time one of the premium Indira Gandhi Airport lounges. Following is the list of lounges at the airport:

At IGI Airport, the Airport Premium Services provider Plaza Premium Lounge Management Limited operates five new lounges at the Terminal 3. The new lounges serve the passengers with various facilities like shower rooms, napping rooms, spa treatment rooms, business center, and much more amenities like that. In addition to that, travelers can enjoy the best level of comfort and hospitality at the terminal too.

At IGI, the “Shower and Massage” Lounge offers its clients, super facility to freshen up and energize yourself. It supports refreshing shower and you can enjoy the SPA treatments too.

It is located at the domestic Arrivals Level after the baggage reclaims at Terminal 3 of Indira Gandhi International Airport. It is available 24 hours a day with 12 spacious shower rooms and Massage & Spa Services. Along with that, you can also get access to Wi-Fi here.

The “Nap & Massage” Lounge is located at the International Arrivals Level of the Terminal 3 at Indira Gandhi International Airport. By offering you the perfect ambiance to relax and rejuvenate after the tiring flight journey, this lounge also supports amenities like SPA treatment with 14 comfortable napping rooms. You can get access to the lounge anytime as it is opened all the time. The lounge is Wi-Fi enabled too.

Coming to the parking facilities at the airport, it includes following details:

You can find the Smoking Zones at IGI Airport in all terminals.

The facility of wheelchairs is provided by the Airlines or Ground Handling Agencies at the visitors’ lobby located near Entry Gate 1 & 8 at Departures.

In Indira Gandhi International Airport, you can find 10 dedicated phones at departure forecourt drop off lanes which efficiently connect passengers to respective ground handlers for the provision of wheelchairs.

Following are the descriptions in relation to various eating spots at the airport: 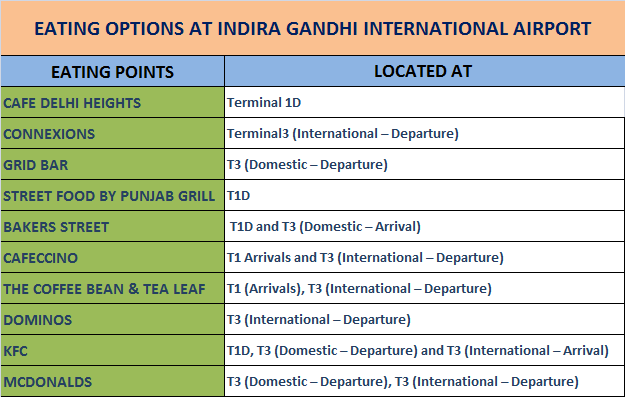 There is a wide range of alternatives available at the airport regarding shopping which include:

Passengers have enjoyed their stay at the airport and following are one of the Delhi Airport Reviews:

Modern, light and airy arrivals area. I found my pack after a 5-minute wait at the carousel and headed to customs. The airport terminal is beautifully decorated and equipped with clean, modern bathroom facilities. In some cases, it is far superior to many western airports. The return journey was equally efficient though the security seemed much tighter on the way out of the country with rigorous searching and questioning. I was through the security and in the departure Lounge in around 45 minutes. The airport has the usual array of restaurants, lounges, shops, an outdoor smoking area and a bar which made for a pleasant wait for my Jet Airways flight. All in all, it was a pleasant experience and one which I look forward to repeating.

In short, Delhi airport has been a short and a sweet experience for me in comparison to other airports around the world that look more like a shopping complex than an airport. In my experience, it took me less than 30 minutes to get out of the airport as I find not a single queue until luggage collection point. I like departures security at the airport gates which do not allow unnecessary people to enter the airport except the travelers. The staff is helpful and friendly. At check-in, they provide help with the luggage. Before you go for immigration, there are three points where you are told about immigration forms. A short and a nice collection of duty-free with a food court.

In my First experience to Delhi Airport, I was most impressed. The baggage transit system functioned well with my bag being transferred from my Emirates flight to my Jet Airways flight seamlessly. En route home to Manchester, I used the executive lounge where the shower and the food were excellent.

At Indira Gandhi International Airport, you will find the following terminals:

At IGI Airport, all terminals have been designed to ensure safe movement of passengers, especially with reduced mobility. Availability of designated car parking bays, elevators, reclined passenger movers just enhances the whole airport experience. Passengers can find a special counter which is located near gate number 1 at Terminal 3 and gate number 8 at T1D which help them to get access to the wheelchairs. A passenger can also call “Special Assistance” from the telephone installed at the curbside of Terminal 3.

You can find the Smoking Zones at IGI Airport in all terminals. These lounges are located inside the terminals, after security screening. Smoking is prohibited in rest of the areas.

In T1D of IGI Airport, the Smoking Zone is located on the first floor.

In T3 (International), you can find the Smoking Zone at the pier junction closest to Gate 15.

In T3 (Domestic), Passengers can get access to the Smoking Zone at the pier junction closest to the retail area.