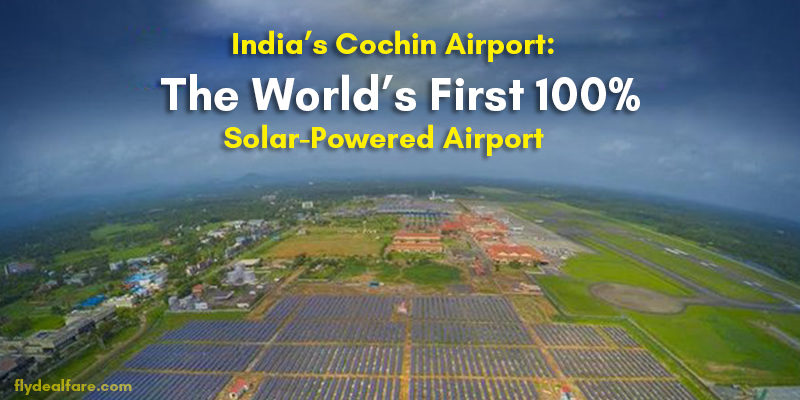 When it comes to talking about the airlines, the majority of the people are still unaware about how much fuel exactly used by a single airline. And if we talk about the cost, it is huge. On estimation, a plane like a Boeing 747 uses 1 gallon of fuel i.e. about 4 liters of fuel every single second. YES, it’s true!

Similarly, talking about the airport electricity consumption, these alone consume up to 180M kWh of electricity per year along with terminals.

No doubt, Science and technology are playing their role but it also leads to climatic changes and global warming issues which have become some of the most important challenges the world is currently facing. In short, there is an urgent need for a greener and cleaner energy source.

Taking an initiative regarding the same, the Cochin International Airport of Kerala just go out of the way and has started something which is not only new but also environment-friendly. The airport has become the first solar airport of the world to be run completely on solar energy.

Being India’s fourth-largest international airport, Cochin Airport has become the first airport to function completely on solar energy, marking a major milestone on our planet.

Cochin international airport is the 4th largest airport in the country on the basis of passenger traffic. Hence it requires around 48,000 units of electricity per day (Quite Huge!)

In short, it will make the airport “absolutely power neutral”. That means it can create as much energy as it consumes. Think how much money the airport is saving per day.

Not only that, the airport is one of the largest in India. It supports about 1,500,000 square feet of terminal space alone. Hence, to generate enough power to run the whole airport and to make a balance in its expense and profits, the respective authorities had to build a 12MW solar plant at the airport itself.

ABOUT THE SOLAR PLANT:

WHY IS TURNING SOLAR IMPORTANT?

Let discuss some of the best advantages of turning solar:

Yes, it is true that the solar plant cost CIAL about 10 million dollars to construct, but when it comes to daily electricity consumption by the airport, it can be easily recovered within the span of 5 years or less.

The expected life of these solar panels is about 25 years. That means the airport has around 2 decades of significant savings if everything goes with the plan. The benefits to the environment just act as a cherry on the cake of huge profits.

CIAL has also planned to grow more by selling the surplus energy produced from the plant back to the local electricity utility i.e. KSEB; Kerala State Electricity Board.

With the help of the solar penal, the airport initiates and mark an example for other airports to take part in minimizing the impact of global warming.

In a period of 25 years, it can save 3,00,000 tons of carbon emissions from coal-fired power plants. It is equal to planting 3 million trees.

CIAL also plans to double the solar production to 28.8 MW of power production within 2 years as part an ambitious plan to expand solar power with 3 major projects which are on construction stages.

Several other Indian airports are looking to utilize the surplus land to set up utility-scale solar power projects and gain more just like the first solar powered airport.

WHAT DOES IT MEAN FOR INDIA?

When it comes to carbon emission, India holds the fourth spot among the most rapidly growing economies. Hence, the country is trying to become environmentally friendly and take initiatives towards greener energy sources. The use of solar penal at the Cochin airport just set an example for the rest of the country all around the world to adopt the features of the first fully solar powered airport.

The government of India hopes that other airports and industrial plants will follow the footprints of Cochin airport and may adopt this technique of saving more and becoming environmentally friendly.

All this not only help the country to reduce its carbon emission or making the environment of the entire planet safer and cleaner but also help in increasing the income of the country.