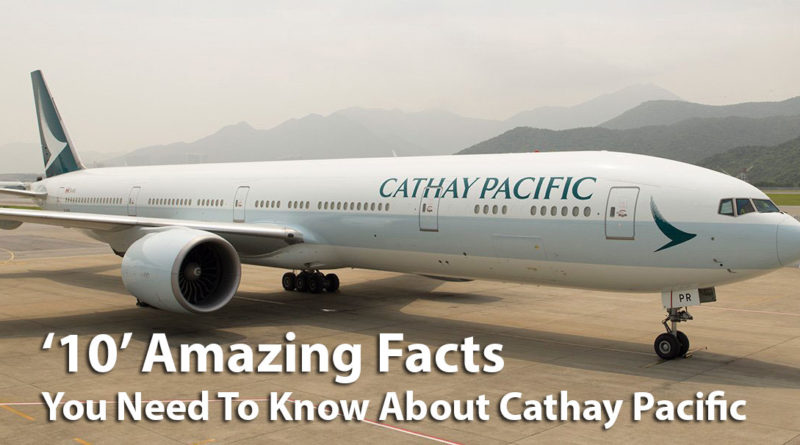 Traveling through the air is the best mode of transportation for the majority of the passengers. And due to the number of rules attached to the carrying and checking-in and out, passengers prefer to remain aware of all the updates of different airlines.

Along with that, multiple travelers also show a great interest in collecting information regarding the cool and unknown interesting facts of their favorite airline. Basically, every airline has a story attached to it and people are excited to known that.

Talking about the Cathay Pacific, the airline is indulged in a number of unique attractive stuff which grabs the attention of most of the passengers. Some of them are discussed below.

#1> Cathay was founded by an Australian and American:

As the airline’s dominance in Asia and has its home base in Hong Kong, but originally it was founded by an American and Australian ex-air force pilots on 24th of September in the year 1946. Moreover, less than 20% of CX pilots belong to Hong Kong Chinese plus the executives are mostly British. Roy was an American citizen and served the CNAC during the war flying supplies to Burma who had named the airline Cathay Pacific.

It is quite an amazing fact that Cathay Pacific has won the best airline award of the world, a number of times. It has been awarded as the “Airline of the Year” four times by the Skytrax which is more than any other airline in the world. The award has been given out since 2001, starting with Emirates. And in the year 2003, 2005, 2009 and 2014; Cathay claimed this award.

Cathay also supports the most modern and latest passenger aircraft in service i.e. the Airbus A350. On 30th of May, 2016 Cathay Pacific received it’s very first brand new A350 from the Airbus manufacturer in Toulouse and it becomes one of the few operators supporting Airbus A350 which is quite an interesting fact.

Cathay Pacific received its very first jet in the year 1964 which is introduced to extend its network and to stay more competitive among its competitors. The jet stayed part of the fleet for 11 years before being retired in 1975.

Cathay has its very first nonstop transpolar flight landed at the new Chek Lap Kok international airport and has its arrival at JFK Airport in New York which is 16 hours and covers a total distance of 8,067km.

One of the interesting facts of Cathay is that all the regional flights which are being operated by Cathay Dragon are now rebranded with the former name Dragonair which is soon to become Cathay Dragon.

#7> Records of the most Punctual Airline:

The airline supports the most efficient organization and merely gets delay over the last decade. Hence hold a very good record in timely arrivals and departures.

Cathay supports a wide selection of delicious food supplies to the business class transpacific as well to the economy class passengers. If the Cathay Pacific’s food and drink in business class are excellent then its eating options of economy class meals are way better than the most of the other airlines.

The airline also arranges specific arrangements for the kids traveling through the air and offers a lot of options in kid’s meals that come with a juice box and a cute curly straw.

One of the unique features of Cathay is that the airline uses foam for each seat section; is constructed differently in order to support your whole body.

ANS:- We are the people behind Cathay Pacific and Cathay Dragon. We are proud of our Hong Kong heritage but equally proud of the global, diverse workforce that makes us who we are. We are relentlessly driven to create lifetime customer loyalty, value for our shareholders and satisfaction and enrichment for our employees.

ANS:- “One of the best airlines I have flown with” Cathay Pacific has really great customer service. Seats very comfortable and I slept like a baby. Leg room very sufficient and a great food menu on-board. Up there with Singapore Airlines to be honest.

ANS:-  This was a positive flight experience with Cathay Pacific. The airline brings efficiency, professionalism and quality to all aspects of the travel experience, from the new check-in appearance, to excellent onboard service and an organised, well-practised pre-arrival procedure and good ground presence at HKG.