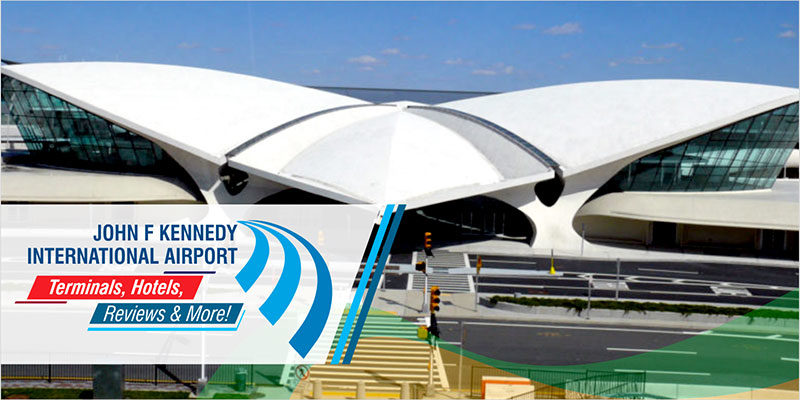 John F. Kennedy International Airport or JFK Airport is a major international airport located in New York City. Being the busiest international airport in North America, it is also the fifth busiest airport of US. It handled more than 58 million of passengers in the year 2016 and supports nearly hundred airlines, both non-stop and connecting flights to several destinations all over the world. There are six passenger terminals and four runways at the airport. It serves as a hub for American and Delta as well as treated as a primary operating base for JetBlue Airways. The JFK Airport code is ‘JFK’.

The airport was opened in the year 1948 and was known as Idlewild Airport. In 1963, it was renamed as John F. Kennedy International Airport in memory of 35th President of the United States, John F. Kennedy.

JFK Airport has six terminals in total and supports around 128 gates.

The Terminal 1 was opened in 1998. The European and some Asian & African carriers land at Terminal 1 which includes names like EVA Air, Austrian Airlines, etc. Being designed by William Nicholas Bodouva along with its associates, the terminal 1 and the Terminal 4 are the only two terminals at John F Kennedy International Airport which have the capability to handle the Airbus A380 aircraft. There are 11 gates in total at the Terminal 1.

The Terminal 2 was opened in 1962 which supports the Northeast Airlines and Northwest Airlines. It is exclusively used and operated by the Delta Air Lines nowadays. After the opening of the Terminal 4 in the year 2013, the Terminal 2 has been designated as the “C” gates by Delta and support 11 Jetway-equipped gates in total.

JFK Airport terminal 4 was developed by LCOR, Inc and it serves as a major international hub for Delta. This terminal was the first one in the United States to be managed by a foreign airport operator. It also serves the Asian airlines, some African along with the European airlines. This terminal is the major gateway for international arrivals at JFK. Being opened in 2001, the terminal later expanded in the late 2000s and early 2010s. The terminal includes nine new international gates along with the additional baggage space. It also serves many international airlines including few Skyteam airlines, the Star and non-aligned airlines. The Terminal 4 has 38 gates in total. 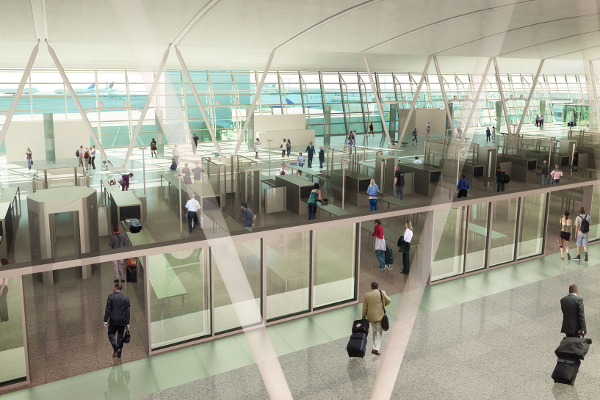 The Terminal 5 was opened in 2008. The terminal handles the North American regional flights, Caribbean flights, American domestic flights and others. Being re-designed by Gensler and constructed by Turner Construction, the terminal supports a wide range of gift shops and restaurants. The terminal is also used by Hawaiian Airlines which partnered with JetBlue.

At JFK Airport, the Terminal 7 was designed by GMW Architects to support BOAC and Air Canada in 1970. Currently, the terminal is operated by British Airways and it is also the only airport terminal which is being operated by a foreign carrier on US soil. The terminal supports the IAG carriers British Airways and Qantas along with a number of other airlines like Star Alliance carriers ANA and LOT Polish Airlines as well.

American Airlines began an eight-year program in the year 1999 in order to build the largest passenger terminal at JFK which was designed by DMJM Aviation. The new terminal was opened in stages in 2005 but its official opening takes place in August 2007.

Talking about the size of the terminal, it is twice the size of Madison Square Garden, supporting a number of retail and food outlets with 84 ticket counters and about 10 security checkpoint lanes along with the U.S. Customs and Border Protection facility. The Terminal 8 serves an annual capacity of 12.8 million passengers and has 29 gates in total.

Sleeping at the airport is not everyone’s cup of tea. If you are one of those travelers who find it really difficult to settle down at the airport or one of its lounges, then you can avail the option of numerous airports hotels within or near the terminal. You can take the help of the airport guides or can read traveler reviews before deciding whether to sleep in the airport or a warm bed of a hotel. You can go through a big list of airport hotels at JFK Airport.

Here is the list of JFK Airport hotels which are available few minutes away:

You can easily get the glimpse of amazing services of JFK Airport lounges. 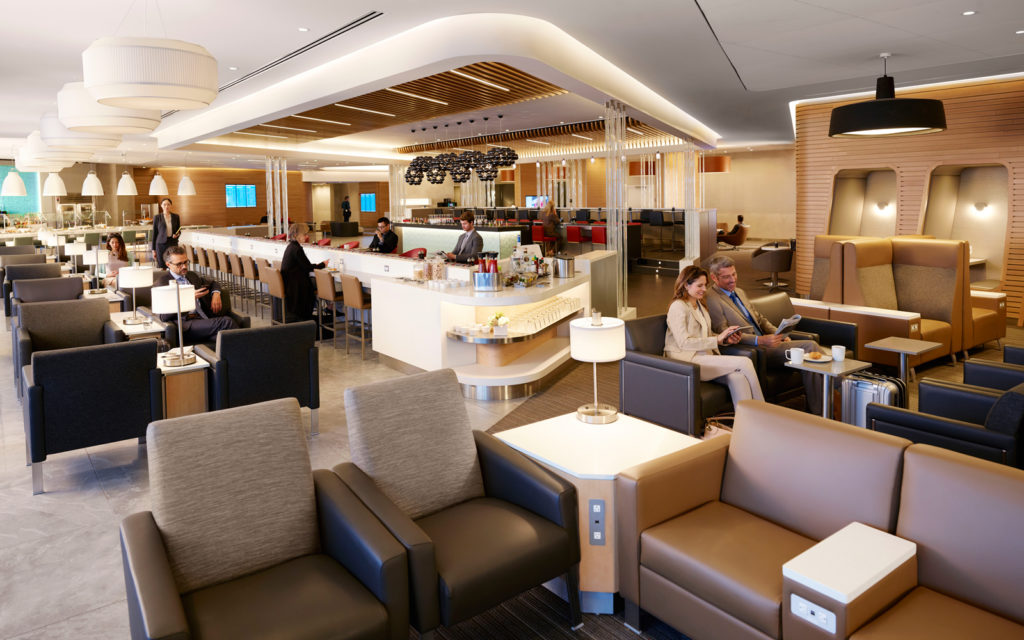 Whether you are an economy class traveler or the first-class one, following are the list of lounges:

You can also enjoy the services of USO Center that is free of charge to members of the military and their families. The lounge features entertainment, quality dining and free Wi-Fi facility. It is located at the Terminal 5 of the airport.

Following is the list of restaurants available at different terminals at JFK:

You can enjoy the facility of free Wi-Fi at the airport which is available for 30 minutes. Beyond the given time limit, you can have the option to purchase additional time through Boingo which is provided throughout the terminal buildings by Boingo Wireless and different rates are charged on that.

In the case of any medical emergency, you can easily get the assistance of trained medical technicians who are available 24 hours a day for your help. The closest pharmacy available is the Wakefield Pharmacy which is located a few minutes away from the airport. In addition to this, non-prescription medicine can be purchased at the pharmacy at Terminal 4. And the timings linked to it are 7:00 am to 11:00 pm. If you need the services of a doctor, then a privately operated medical building is also there which is staffed with doctors 24 hours a day.

You can enjoy different modes of transportation at the JFK Airport.

AirTrain is an elevated railway system that connects all airport terminals and parking lots with the Long Island Rail Road and New York City subway lines in Queens. This service runs 24 hours a day and is affordable too. It is easy to use and is wheelchair-accessible. 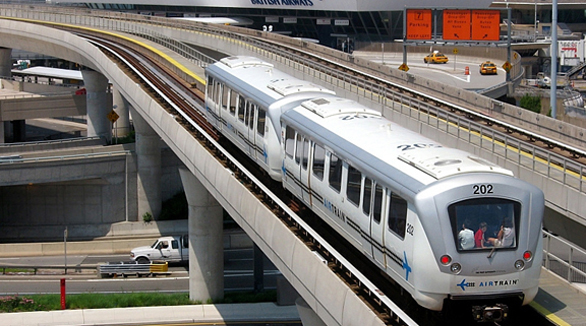 There are a number of car rental companies available at the airport such as Advantage, Dollar, Hertz, Payless, and others. This facility is available on the JFK Airport arrival level near the baggage claim in all terminals.

You can avail the bus services to and from the airport through the three NYC bus routes between the airport and nearby areas. You can find these adjacent to terminal 5.

You can find the Taxi stands outside each terminal. Try to ignore non-uniformed people.

You can get easy access to the terminals and the parking lots at JFK which are divided into five areas (each specified by a separate color). Parking fees attached to the vehicles at JFK is equal to the lowest rate available at the airport.

You can find numerous duty-free shopping options at Terminals 4, 5, 7 and 8. Along with that, a wide variety of retail stores, boutiques, and newsstands are also located throughout the airport.

At John F Kennedy International, each terminal at the airport is featured with at least one wheelchair accessible restroom. If you still find it difficult, then information booths are located on the arrivals level at all the terminals which can provide assistance in locating these restrooms.

You can easily find various dining options landside and airside. There is a Dunkin Donuts airside in Terminal 1 and at terminal 4; you’ll find a 24 hour McDonald’s. 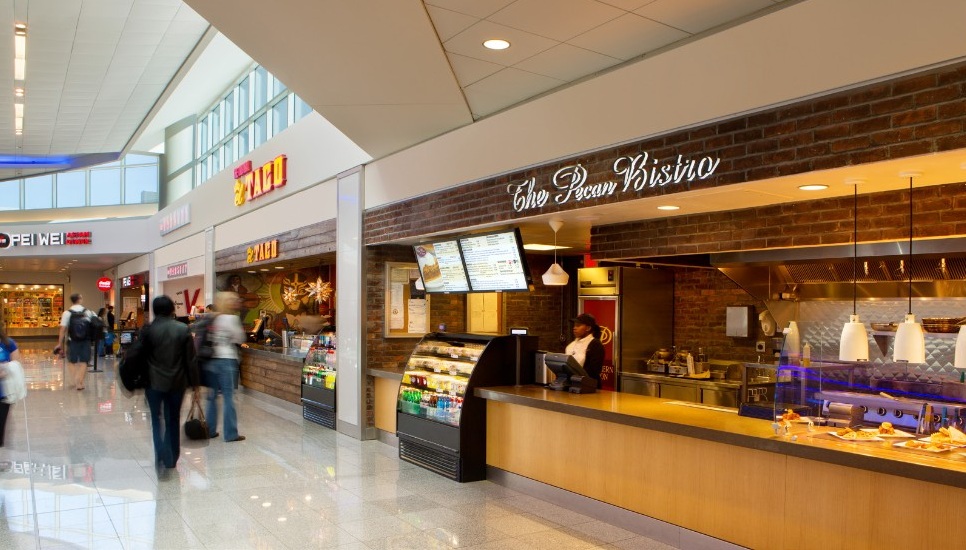 I went to terminal 5 in JFK which is the best terminal at the airport. Staff is nice plus the place is clean and easy to move about. There is a great collection of food and things to do inside security. The line went fast for bag check and security. Options like free Wi-Fi to order food from the gate and the clean bathrooms are superb. I would highly recommend flying T5 because they offer the best facilities compared to other terminals.

JFK can be a breeze during off-peak hours. We arrived 2.5 hours early for DL 1 to LHR, however, there was no queue at security at 8.30 pm. On the return at 4 pm, there was no line at immigration or customs and even though only one flight arrived in the hour. They had reasonable 10-12 desks open for 200 people which probably was a max wait of 15 minutes for people at the very back of the plane. Luggage took less than 5 minutes. The only problem was a 20-minute wait in the cab line with only 1 cab showing up during that time. Overall it was a fine experience and would use JFK again for off-peak flights.

The staff in Terminal 4 was pleasant and attentive even humorous. No lines at JFK Airport departure as we had arrived at EWR. Signage was good and although the duty-free offerings are not up to European or Middle Eastern standards there was more variety than most of the US airports.