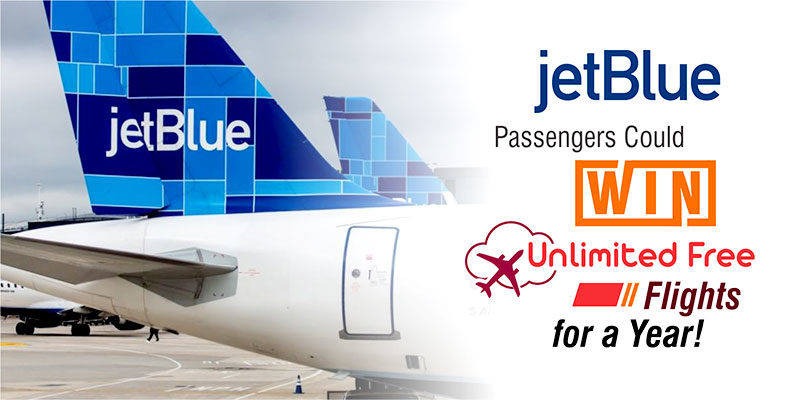 There is some good news for the passengers who use to travel through JetBlue Airlines. The carrier has introduced a scheme through which a few lucky passengers will get the chance to take unlimited trips to anywhere for an entire year.

The airline is offering it’s ‘All You Can Jet Pass’ competition through which three lucky passengers can take unlimited trips to anywhere. JetBlue will announce the winners on December 27.

Basically, this offer will let the passengers to avail three All You Can Jet (AYCJ) passes. The three winners will get an AYCJ pass for 1 year along with one year of travel. You need to book a nonrefundable flight directly with JetBlue or a combo of flight plus hotel JetBlue Vacations package by 15th of December. In this way, you will be automatically entered to win one of the three AYCJ passes.

In addition to that, this will let you and your friend cover flights to and from JetBlue’s more than 100 locations around the globe, including Aruba, Jamaica, and the Dominican Republic.

This is not the first time that the airline is offering something like this. It was first offered the passes for a $599 fee in 2009. JetBlue launched a competition to win them back 2014 too.

Currently, the airline is returning with another competition to snag the passes, with two ways to apply.

As per the offer, every non-refundable flight booked directly through the airline will be counted as one entry into the competition whereas the round-trip flights will count as two entries each.

The few conditions attached to it are that the travelers need to be a legal resident of the United States and 18 or older to apply.

There are no blackout dates for the All You Can Jet Pass, and winners will be allowed to switch the companion they travel with as many times as they would like during the past period, which runs from February 1, 2018, through January 31, 2019.

There is no limit attached to the number of flights but the pass winners can’t book two flights out of the same city in one day. Plus, the pass does not apply to Mint and Even More Space seats or JetBlue’s vacation packages.