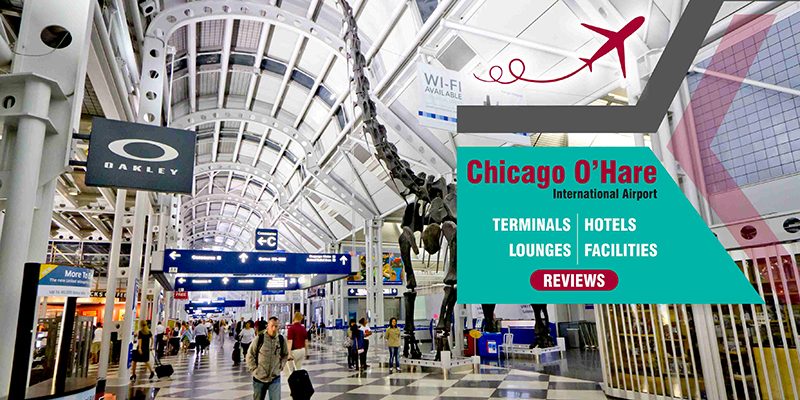 O’Hare was the busiest airport in the world by a number of takeoffs and landings in the year 2014. However, it lost the title to Atlanta a year later. But as of January 2017, O’Hare is serving its services to 208 destinations which include 153 domestic destinations in the United States and 55 international destinations in North America, Asia, Europe and other countries and has placed in the list of US busiest airports.

The airport is a major hub for American and United Airlines and also a hub for regional carriers like Air Choice One. O’Hare was voted as the “Best Airport in North America” for 10 years consecutive years by two separate sources: Global Traveler Magazine and Readers of the U.S. Edition of Business Traveler Magazine.

Terminal 1 is used for United Airlines flights which include all mainline flights and some United Express operations as well. It also includes flights for Star Alliance partners Lufthansa and All Nippon Airways.

There are in total 50 gates on two concourses:

The concourses B and C both are linear concourses located in the separate buildings which are parallel to each other. The concourse B includes the airport roadway and houses passenger check-in, security, and baggage claim on its landside and aircraft gates on its airside. And the concourse C is a satellite terminal which has gates on all of its sides and is connected to Concourse B via an underground pedestrian tunnel. The airline operates three United Clubs in Terminal 1 which has one on Concourse B near gate B6, one located near gate B16, and the third one on Concourse C near gate C16. You can also witness the premium lounges at O’Hare like United First International Lounge and United Arrivals Suite in Concourse C near gate C18.

The Terminal 2 of the airport support Air Canada as well as Delta Air Lines and Delta Connection domestic flights too. The Terminal 2 is also used for most of the United Express operations but the check-in counters for the same are in Terminal 1. You will also find a United Club in Concourse F near gate F8 and a Delta Sky Club on Concourse E near gate E6. The services and facilities of United Continental Holdings and United’s parent company are currently upgrading at Terminal 2. It also includes the construction of 10 new jet bridges for the regional flights and along with the construction of United Club to replace the current lounge.

At Terminal 2, you will find 43 gates in total on two concourses:

Terminal 3 supports all the American Airlines flights as well as departures for selected Oneworld carriers such as Air Berlin, Japan Airlines, etc.

The Terminal 3 has 75 gates on four concourses: 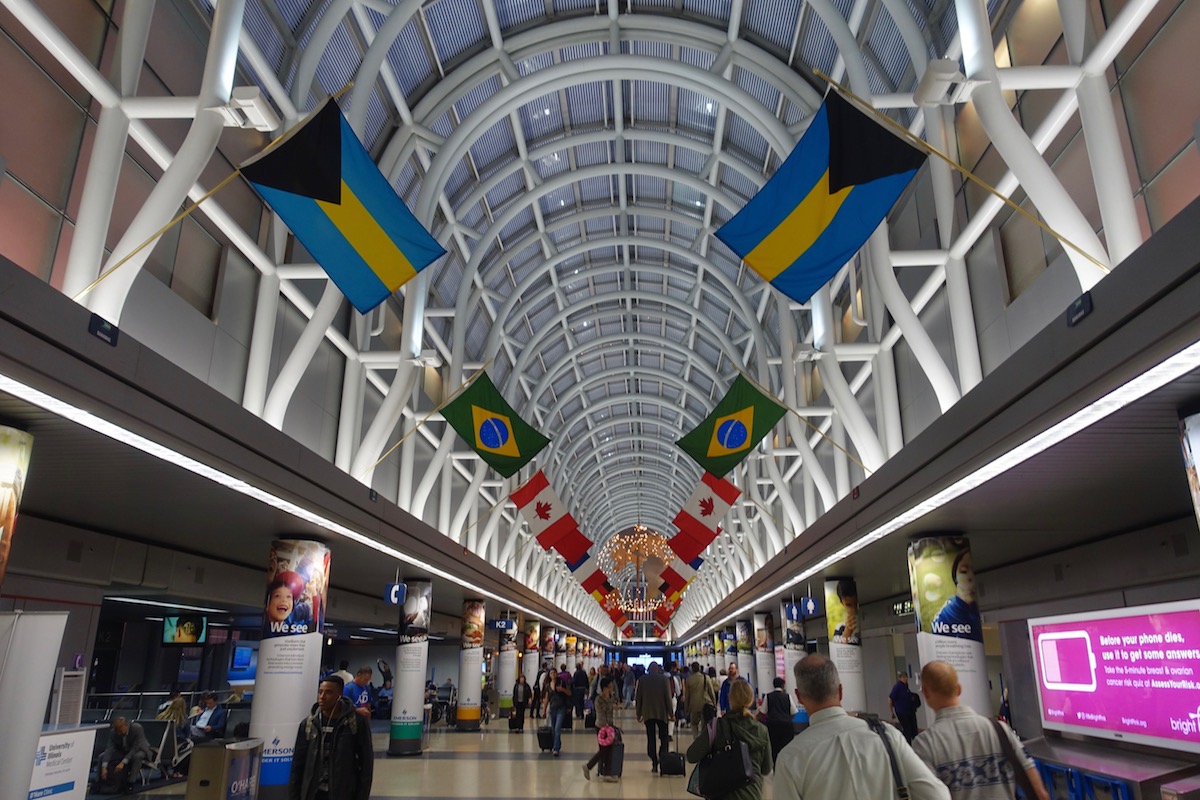 The Concourses G and H support most of the American Eagle operations whereas Concourses H and K favor the American’s mainline operations. The Japan Airlines, Air Berlin, and Iberia depart from K19 whereas the non-affiliated Alaska Airlines operates from H4.  The Concourse L is used for flights being operated by Frontier Airlines, JetBlue, Spirit Airlines, Virgin America, etc. Very soon, five more new gates will be added to the Concourse L which is expected to be used primarily for American Eagle’s Embraer E-175 fleet.

The airline operates three Admirals Clubs in Terminal 3: one of which is located in the crosswalk area between gates H6 and K6, the other one before Gate L1, and the third one in Concourse G across from gate G8.

The Terminal 5 has 21 gates in total and planning’s are there to add 9 more. It is designated as Concourse M on airport maps.

All of O’Hare’s international arrivals excluding the flights operated by Aer Lingus and Etihad Airways are processed at Terminal 5 of the airport. The Terminal 5 has several airline lounges such as the Air France (KLM Lounge), Swissport Lounge, British Airways First Class Galleries and Business Class Terraces Lounge, Korean Air Lounge and much more.

Terminal 5 has also undergone a $26 million renovation which was being designed by A. Epstein and Sons International. The renovation involves many Chicago-based restaurants and brands, supports updated design and a re-engineered layout. This project was completed on April 4, in the year 2014.

Following are the details of the hotels at O’hare Airport:

There are numerous airline clubs to provide the passengers the Airline Lounges Services. You can find a big list of O’Hare Airport lounges. Travelers that are not members can also enjoy the relaxing and quiet ambiance there before take their flight. You can find United / Continental / Lufthansa (United Club), American / JAL / Iberia (Admiral’s Club), Executive Center (26 meeting rooms), Delta (Sky Club), AirFrance / KLM, British Airways First Lounge and more at the Domestic as well as International terminals.

Taking about the O’Hare Airport facilities, there is a number of them to make your stay at the airport comfortable and relaxing.

The Blue Line is the most comfortable one to connect different places from O’Hare airport to downtown Chicago,

Passengers can also use the O’Hare Transfer Station in order to reach Metra’s North Central Service trains to go to downtown Chicago.

You can find Taxis at the lower level of each terminal of O’Hare airport which is outside the Baggage Claim Area. Taxis facility is available through Chicago and the suburban areas. It is always recommended to pick up a licensed taxi from the Departures level.

You can get the facility of PACE buses also which run throughout the Chicago vicinities from O’Hare airport.

You can easily get a number of car rental agencies that provide car rental service at the O’Hare airport.

At O’Hare airport, there is an Urgent Care Clinic to attend all the passengers with urgent medical care. It is located at the Terminal 2, ticketing level near the Travelers Aid Office. It is opened from Monday to Friday. There is no appointment needed to avail this facility and the insurances are also accepted.

There is the availability of meeting rooms at Hilton Chicago O’Hare airport and you can avail the facility across the Terminals 1, 2, & 3 in the lower arcade level of the Hilton Hotel. United and Admirals Clubs also provide the facility of business rooms.

You can avail the facility of free Wi-Fi connection at the O’Hare Airport in Chicago. This service is provided throughout all the terminals that are 1, 2, 3 and 5. This facility is totally free during the first 30 minutes and premium services with unlimited access are also provided.

At the airport, there are multiple power charging stations available for the comfort of all the passengers who need this service. You can easily find power stations and a virtual concierge which provides information in 8 different languages about transportation, weather, hotel, etc.

At Chicago International Airport, you can also get the glimpse of a Public Art Program which involves a lot of paintings, sculptures and art pieces exhibit through the airport facilities.

International Parking is also known as Lot D which is the Main Parking Garage at O’Hare airport. It is located adjacent to the International Terminal 5.

Following are the Chicago O’Hare Airport reviews of this specific airport of US:

We recently flew into O’Hare airport when we arrived from Charlotte NC. We had a late night arrival. The restrooms thankfully were spotless. We were able to locate at the Blue line to get to our destination. On our departure from Chicago, we were able to print our boarding passes pass through screening and the ticketing area in about 15 minutes. There were many food vendors and stores, we could buy food from and we even saw that you could get a massage. We had to wait about an hour but it was not an unpleasant wait. The NSA staff and airport staff were all pleasant and helpful.

My experience was pleasant flying from ORD’s newly remodeled Terminal 5. No hassles through TSA on the way out and no headaches coming back in. The new shops are lovely but pricey and it was a fun passing time in the duty-free shop. We did not encounter any rude or indifferent employees. What I liked the most is about my return through ORD. Baggage and customs were a breeze too. So ORD is now my first choice if I’m flying internationally.

I arrived at Chicago O’Hare Airport on time from an international flight and it took me 15 minutes to leave the plane and to pass immigration as well as customs. The queuing systems seemed to work perfectly and the newly introduced one-stop-principle for passengers traveling with hand luggage only did a great job. In addition, the train service at this airport is great although there is no airside link between the terminals available. My general impression of terminals 5 and 1 was that they were very clean. Moreover, the variety of shops, restaurants, and cafés cover a broad range of tastes and they are a gorgeous option to shorten the waiting time.