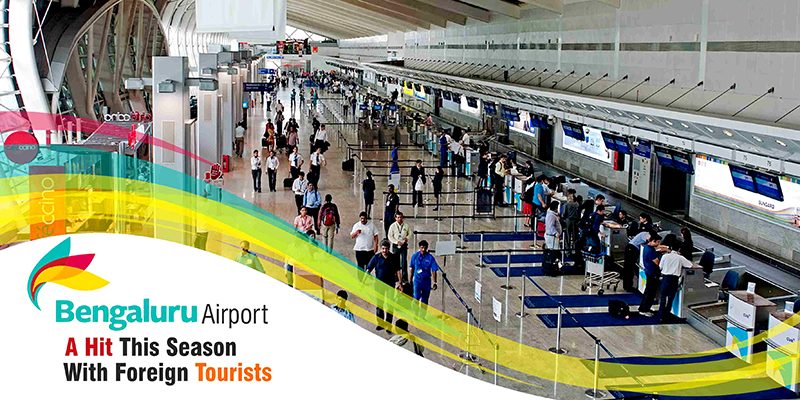 Talking about the Bengaluru’s Kempegowda International Airport, it is considered as the 2nd most preferred in South India this festive season.

In South India, the Bengaluru Airport is mostly preferred by the international tourists to disembark during Christmas holiday season for 2017. Coming to figures, an estimated 5.33% of total foreign tourists landed at KIA (India) during the month of December.

Delhi’s IGI Airport witnesses the highest percentage share of foreign tourist arrivals i.e. 25.80%. After that, there is Mumbai’s Chhatrapati Shivaji Maharaj Airport as per the reports of the Ministry of Tourism monthly estimates of Foreign Tourist Arrivals.

Among the South Indian airports, only Chennai Airport shows better results than the Bengaluru Airport with 6.36% of percentage share.

Comparing to last year’s figures, Bengaluru Airport shows a little dip in the percentage share of foreign tourist arrivals during December 2017. The airport performs better than the Goa’s Dabolim Airport. Last year, Goa International Airport captured the 2nd spot in South India with 5.64% of passenger growth. This year, it goes down to 5.29%, pushing it to the third spot.

A total of 2.41 Lakh foreign tourists arrived on e-Tourist Visa as per the figures of the Ministry of Tourism.

As compared to 5.1% during December 2016, this year; Bengaluru Airport witness 5.7% tourists arrived on e-Tourist Visa. Some of the busiest airport international routes are Singapore, Dubai, Kuala Lumpur, Frankfurt, and others.