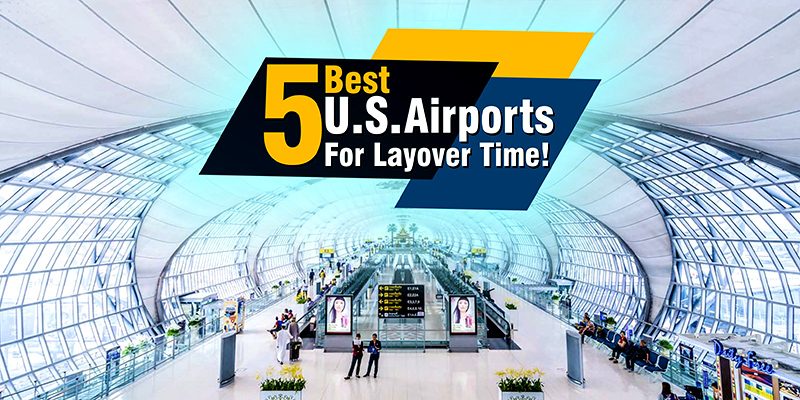 McCarran International Airport lets you exercise that luck at slot machines throughout the airport, while other airports leave you sitting at dull gates hoping you’ll get lucky and your flight will arrive on schedule. Always remember that what happens at McCarran Vegas stays at McCarran Vegas! There’s also a free art museum when your luck runs out. It also has an aviation museum, designated walking paths and free Wi-Fi, to keep you busy and entertained. Also, don’t miss the dining and shopping in the renovated Terminal 3. A small, family-owned restaurant, Village Pub, serves beer-battered fish and homemade soups and salads and chips.

Dallas-Fort Worth International, American Airlines’ biggest hub, is a common layover time spot for travelers, and there are plenty of ways to pass your time here. It includes one-mile walking path stretching along Terminal D and two yoga studios which encourages movement and circulation. Travelers with long layovers can rent suites to take a nap between flights. Travelers can take advantage of the airport’s free Wi-Fi and sit back in leather armchairs by the gates.

The Minneapolis-St. Paul Airport has consistently been on top marks from travelers. The airport features a central concourse that includes shops and a food court. For fresh noodles and dumplings stop by Shoyu. Check out Ike’s Food & Cocktails for surf-and-turf and cocktails. After eating, the travelers can take a walk on the 1.5-mile path around the airport’s perimeter. Convenience-wise, Concourse D has a barber and hair stylist. Both terminal buildings also include postal services.

Detroit Metro’s mid-concourse Water Feature and its surrounding lounge areas are a magnet and an oasis for travelers which is inspired by the lines of a flight map. The 700-foot-long underground Light Tunnel designed by a Michigan-based glass maker and features multicolor LED lighting which is synchronized to an original score makes moving between the concourses a unique and stimulating experience. Hockeytown Café in the North Terminal pays homage to the Detroit Red Wings and serves traditional pub food like burgers and wings, for a taste of local fare.

Art and fine dining at Delta’s major hub in the U.S. make it an easy place to pass time between flights. Since the late ’70s, Hartsfield-Jackson’s art program began and the collection now contains more than 250 pieces. The works from Georgian students is exhibited at the airport. Local musicians are hosted at Hartsfield-Jackson on various occasions throughout the year for its select music series.