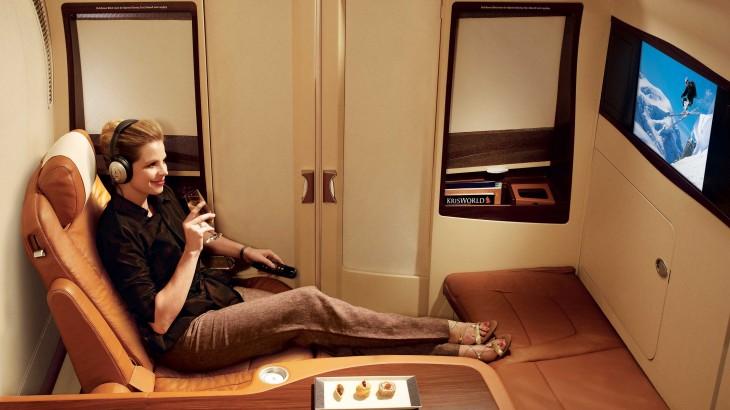 The flag carrier of Singapore, Singapore Airlines has become the very first carrier to introduce a double bed in its cabins. The airline is taking the airborne luxury to some another level.

The airline also mentioned that other than this, there will be little changes in the five new super-jumbo planes.

A huge competition can be seen among airlines when it comes to pampering the upscale business traveler.

The cabin crew members will help the passengers to make up a fold-down flatbed with a duvet and cushions. Etihad Airways also offer in-flight showers for first-class passengers. In the residence suites of the airline, you can enjoy a lie-flat bed and a living area with a 32-inch television and private butler.

The first flight with the new cabin products will be on 18th of December on the Singapore-Sydney route.

To work on cabin upgrades, the airline has hired specialist design firms. Five years ago, it has hired DesignworksUSA (a unit of BMW Group) ago to work on a new first-class cabin to increase privacy, storage space and comfort.

Singapore Airlines is the only Asian carrier that has flown the luxurious Concorde more than three decades ago.

It would be another challenging year for the airline and it has set up a dedicated office to regulate the number of activities which help it to hold a better position and transform the company.

Another airline which goes through the biggest transformation is the Cathay Pacific Airways which has cut 600 jobs at its Hong Kong head office as part of efforts to revive its fortunes.

On the other side, Emirates is also preparing to unveil the new first class cabin on its Boeing 777-300ER planes. It will feature six suites as well as new features for business and economy seats.

Singapore airlines can also be called as the trendsetter of the aviation industry. It has become the first airline to provide free alcohol to economy-class passengers and headsets for in-flight entertainment.

In 2015, SIA introduced a premium economy class and played catch up to Qantas Airways and Cathay.