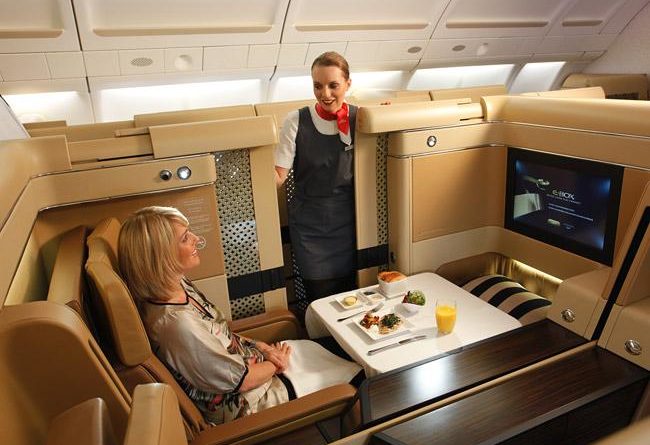 With the introduction of new first class suites on the runway for Qantas, Singapore Airlines, and Emirates, people are curious to know what they are going to get in the New First Class Suites of these 3 largest international airlines.

A number of new additions in the Qantas’ first class are still unknown at this stage.

As per the sources, Qantas may reduce the number of first class suites from 14 to just 10. This may lead to the provision of a larger footprint for each suite or by Qantas to the first class passengers in the A380 and in this process, it will drop out the middle row of four suites.

Emirates is expected to introduce its new first class suites on 12th of November and this is also the opening day of the Dubai Air Show.

As of the new information, Qantas and the Gulf powerhouse will reduce the number of first class suites from 8 down to 6.

Along with this, Emirates New First Class Suites will also adopt the 1-1-1 layout for the luxe cribs instead of 1-2-1 configuration which it is currently using.

The suites are expected to be larger than the present ones and the overall design cues from the airline’s new A380 bar will be totally different from the presently used dark palette of brown faux ‘burled walnut’ and brass trim for a light contemporary color scheme of ivory & champagne.

Singapore Airlines’ new first class suites larger than their modern counterparts but these will be less in number.

Along with that as per the sources, there will be a reduction in the number of berths i.e. six to eight berths which are 12 at this time.

There is speculation that the airline could also offer an oversized 1A ‘apartment’ suite.

This is also expected that the airline has also chosen to relocate its first class. May be in the new additions, you can witness the first class in the Upper deck instead of the nose of the superjumbo’s main deck.