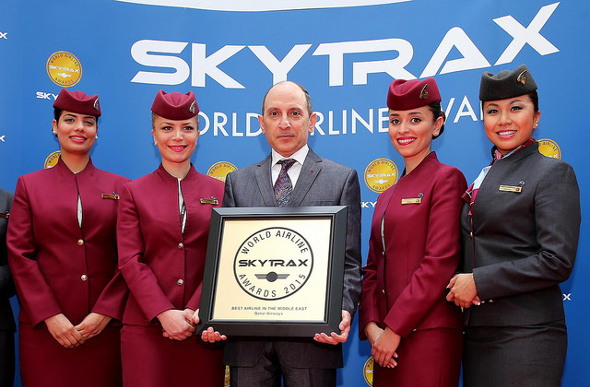 Qatar Airways has consistently been on the top, by winning the award for the World’s Best Airline thrice now, starting in 2011, then in 2012 and this year. In addition to the luxury and comfort it also takes care of the safety of passengers. Qatar Airways has restricted some items  that a passenger cannot fly with. It may include the items that may affect the security and safety of passenger while traveling. From the list of restricted items some are allowed with restriction while others are totally prohibited. You must check if you aren’t adding any prohibited item in your luggage while flying with them. Generally hand baggage restricted items include Guns, Firearms, Blunt Instruments, and Explosives while checked baggage restricted items include Oxidizing Materials, Flammable Items, Compressed Gases, and Organic Peroxides.

According to the rankings published in World’s Airline Awards, Singapore ranks in second place, followed by last year’s winner, Cathay Pacific Airways, and in fourth place Turkish Airlines, the highest position it has ever attained.

The survey is conducted annually, across the globe, and is a one of a kind assessment to determine the winners from the airline industry. The survey comprises of full-service and low-cost airlines and has 41 key performance parameters of the airline’s frontline and product service.

Following are the rankings of the top 10 airlines of 2015:

Being a flyer of Qatar don’t forget to check out the essentials of Qatar Airways. There are rules regarding carry-on and checked baggage. It is necessary to know about these baggage limit otherwise you have to face delay while check-in. These limit are different for each country and routes so specify your journey before you check the baggage allowance.

1.> Why Qatar Airways is the best airline?

There is no doubt in the fact that Qatar Airways is one of the best flight carriers in Middle Eastern countries. This is because of its strong connectivity which offers its passengers a choice of flying to over 120 destinations worldwide. Qatar airways give its best to cater every need of passengers while on board.

2.> How good is economy class of Qatar Airways?

It gives a good experience to fly in the economy class of Qatar Airways. You will be served by the attentive cabin crew. Also, the in-flight entertainment has classic and new films.

3.> Are drinks free on Qatar Airways?

Yes, there are unlimited drinks available throughout the flight, including premium spirits and a rarity in economy class these days.

4.> How many meals are provided on Qatar Airways?

The meal provided in Qatar Airways are Halal certified, and the airline offers over 19 special meals as per the requirement.