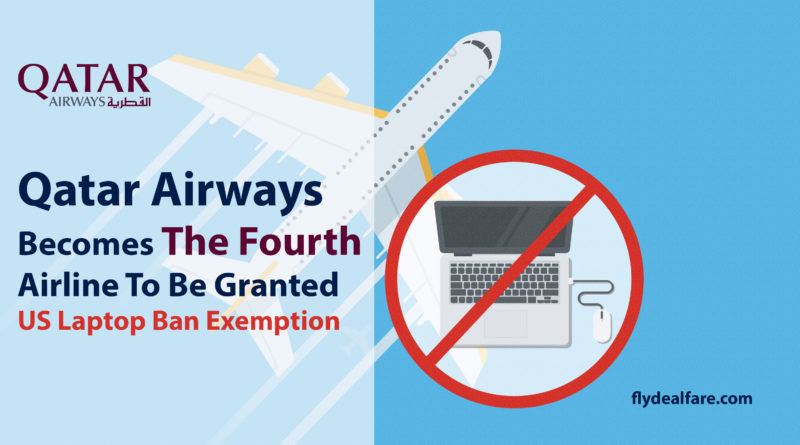 After Etihad, Emirates and Turkish Airlines, Qatar Airways occupies the 4th place among the airlines that would be exempt from measures banning laptops and other large electronic devices in the cabin on the US bound flights.

On Thursday, the airline announced that the multiple passengers who will be flying to the US would be totally free to carry laptops and other large electronic devices with them on the flights. Soon after the announcements from Emirates, Turkish Airlines and Etihad Airlines regarding the exemption from laptop ban, Qatar Airways is also following the same.

Recently, the US laptop ban lifted on Emirates and Turkish Airlines after the Etihad Airlines and now it’s Qatar Airways.

In March, Donald Trump has introduced the ban which restricted the multiple passengers to carry the laptops and other large electronic items in flights to the U.S. specifically from the airports of eight Muslim countries – Qatar, Egypt, Saudi Arabia, the United Arab Emirates, Kuwait, Jordon, and Turkey. The ban was imposed after the fears of explosives or other destructive which may enter in the flight through these electronics.

On Thursday, Akbar Al Baker (CEO of Qatar Airways) has stated that “We are pleased to announce that the electronics ban has been lifted from Qatar Airways flights departing to all destinations in the U.S. Safety and security are always our highest priority.”

He added: “The security measures in place in Doha allow us to continue to provide our renowned world-class service for all our passengers traveling to the US.”

Being selected as the No.1 Airline by Skytrax, Qatar Airlines stated that the exemption came with the approval of the Department of Homeland Security and the U.S. officials inspected the security measures in full operation at Qatar’s Hamad International Airport.

Other airlines are also waiting for the removal of the same ban which includes the carriers of Egypt, Jordon, Saudi Arabia, Kuwait, and Morocco. These are yet to announce the ban has been lifted at their airports.

On Tuesday, Saudia which is a Saudia Arabian Airline stated that it hopes to be granted exemption from the same ban on 19th of July.