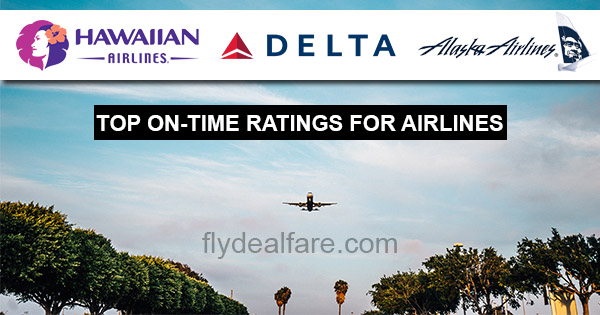 As per the new government’s rankings of the leading U.S. airlines and their on-time performance for the month of MAY, there are numerous changes in the ranking of certain airlines.

The federal government counts a flight on time if it arrives within the time or takes not more than 14 minutes behind its schedule.

Number One: Hawaiian Airlines captures the 1st spot with 89.7 percent of on-time arrivals.

Number Two: Delta Air Lines holds the 1st place as per OAG, releasing this June regarding on-time arrival data, placed 2nd on this list with 82.8 percent.

Number Five: After several ups and downs, United Airlines holds the 5th spot in the listing with 82.3 percent of its flights on time.

Number Six: American Airlines is at number 6, occupying 80.1 percent of its flights on time.

Number Eight: Then the 8th spot is captured by the ExpressJet with 76.8 percent.

Number Nine: Frontier Airlines also manages to get a place in the top 10 with 76.7 percent.

Number Eleven: Then it is the JetBlue Airways, unable to make it to top 10 with 67.2 percent.

The approximate total of all covered airlines come out to be 79.1 percent respectively. Along with this, the report does not cover smaller airlines such as Allegiant Air and some other regional carriers too.