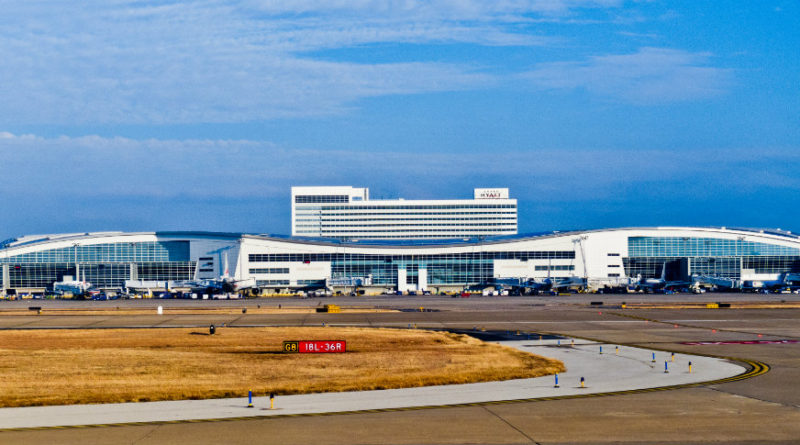 Dallas/Fort Worth International Airport is an international airport which serves the Dallas–Fort Worth metroplex area in the US. The airport widely operates the functions of American Airlines. In the year 2016, the airport served more than 65 million passengers which are a record in itself.

Being the third busiest airport in the world on the basis of aircraft movements, the airport is also considered as the 11th busiest airport on passenger traffic for the year 2016. With more than 900 flights on daily basis, American Airlines at Dallas Airport is the second largest airline hub in the world.

As of mid of 2017 only, DFW Airport has rendered its services to around 227 destinations which include 56 international and 171 domestic destinations within the US.

Being one of the busiest airports in US, Dallas/Fort Worth International Airport has a total of 5 terminals with around 165 gates. The airport is designed in a way so that more and more expansion can be done to accommodate up to thirteen more terminals and 260 gates, although this level of expansion is quite impossible to be seen soon in the coming future.

The Dallas/Fort Worth Airport widely supports the operations of American Airlines and its regional affiliate American Eagle which are the two airlines being operated at all five of the airport’s terminals.

The Terminal A is also called “Terminal 2E” at the time the airport was opened. At that time, it was fully occupied by American Airlines for domestic flights. Before the opening of Terminal D, Terminal A supports most of the AA’s international flights at the airport.

At the time this terminal was opened, it was called “Terminal 2W”. The terminal was occupied by Braniff International Airways which was one of the largest carriers to open DFW in 1974. The airline which occupies all the gates at the terminal B is the American Eagle.

In the year 2006, the US Airways, AirTran Airways, Midwest Airlines, and Frontier Airlines relocated to Terminal E. Before the opening of the Terminal D, all the foreign flag carriers operated from this terminal only.

In addition to the TRIP improvements, a new 10-gate stinger concourse off of Terminal B was constructed between the gates B28 and B33 in order to maximize the growth.

Initially known as Terminal 3E, the terminal C of the airport operates all the functions of domestic flights of the American Airlines.

The Terminal C has not started up their TRIP Improvements but it has been in talks with the American about the future of Terminal C. The probable result of the terminal will include either its destruction or the required renovation. At the terminal, the American Airlines Admirals Club is located at Gate C20.

Terminal D is the international terminal at the airport, covering 2,000,000 sq ft of the area along with the facility of handling 32,000 passengers daily which becomes 11.7 million passengers annually.

Terminal D features 200 ticketing positions with a federal inspection facility which can support 2,800 passengers per hour. Passengers can also find stores like Mont Blanc, La Bodega Wines, Brookstone, L’Occitane and many others at this terminal.

There is eight-level parking garage at the terminal which supports more than 8,100 parking spaces and uses a Smart Technology System. Passengers can also witness air-conditioned sky bridges with moving walkways and elevators connect the garage to the terminal here.

You can easily get access to the American Airlines Admirals Club which is located at D24. In addition to that, you can also find a Lufthansa Lounge, a QANTAS Business Lounge, a British Airways Lounge and a Korean Air Lounge at the gate D21.

Originally known as Terminal 4E, the terminal E was occupied primarily by Delta Air Lines until Delta closed its hub in 2005. Since Delta don’t use DFW as a hub but it still remains as the largest airline operating at the terminal E by operating more than 50 flights on daily basis.

Currently, the terminal is used by all U.S.-based carriers at the airport except Sun Country and by Air Canada Express. The most interesting fact related to this terminal E is that it is the only terminal at the DFW airport in which American Airlines had no presence.

The sixth terminal which will be known as Terminal F and will be located directly south of Terminal D in the future. 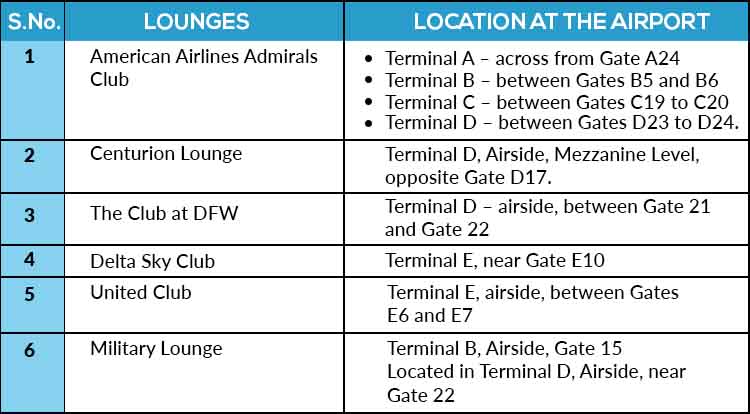 At DFW, multiple travelers all around the world can easily avail the taxi service on the upper level of each terminal.

You can also avail this option which is located near baggage claim areas inside all Airport terminals. The passenger can easily pick-up for courtesy vehicles which is located at the lower level of each terminal.

DART light rail can be concluded as the cheapest and convenient way to travel between the airport and the city center. At DFW, the DART service is available to the passengers on daily basis. DFW Airport Station is connected to entry A10 at the lower level of Terminal A via a walkway.

Passengers can easily get the glimpse of the TDD telephones, amplified receivers, and lowered telephones throughout all terminals of the DFW airport and can also use courtesy phones for airport services.

At DFW, passengers can also get access to the wheelchair-accessible van service which is available 24 hours a day. These vans can be used to travel between any public parking area and the terminal buildings or to go from one terminal building to another. No charge or fee is attached to the bus or van service.

There are more than 70 different shops available throughout the terminals of Dallas Fort Worth Airport. These shops sell everything that passengers could possible requires. Some of the options are:

When it comes to restaurants and cafes, DWF serves more than 50 eateries and bars to the customers. This includes the following set of options:

Multiple passengers will find it very easy to find the best options to eat at the airport whether they like fancy American, BBQ, Asian, fast-food, fine dining, Mexican, Italian, Seafood, etc.

Passengers can avail the business facilities at Dallas Fort Worth International at quite a reasonable amount. Availability of options like fax machines, long-distance phone cards, FedEx and US Mail drop boxes, etc. make it quite easy for the travelers to enjoy the required services. In addition to that, people can also enjoy complimentary and wireless internet connectivity which goes perfectly with a laptop or any other electronic device. In case, you want to hire a laptop, you can also avail that.

Passengers can easily avail the free Wi-Fi facility at the Dallas – Fort Worth Airport. In order to connect to the “attwifi” network, passengers need to follow an easy procedure which let them avail 2.4 GHz for older smart devices and 5.8 GHz for newer smart devices.

If you are traveling with a baby or infant, then at DWF, you can also enjoy services regarding its feeding and change. You can avail the services of the airport’s Nursing Rooms which are located at Airside at Gates A18, E14, B40, and others.

At DWF, Travelex offers currency exchange and travel insurance facilities to the passengers at different locations like at gates D11, D22 (outside security) and at gates D24 and D36 (International Recheck).

Passengers or travelers can charge their laptops and other electronic devices for free at seated power stations which are located throughout the airport. Facility of USB ports is also available at every station, including A10, A24, C6, etc.

At DWF, there is also the availability of relaxing and recharge zones which support a cozy atmosphere with lounge chair and workstation seating. Along with that, Power outlets are available at every seat. You can find these zones at Gates B28, C8, C27, and E8. There is also a theater area that features comfy media chairs along with the 10 screens at Terminal D.

Passengers can also spend their layover time by availing the Spa & Salon Services, including services like manicures, pedicures, facials, massages and more. These are located at gates A25, B28, and E31. Additionally, hair salon services are also available at A25 and D34 locations.

Passengers can avail the ATM services which are located landside in the baggage claim and at International Arrivals area of Terminals D and E.

We recently went from Lubbock to Miami via Dallas/Ft. Worth on American Airlines. Dallas is one of the best airports I have ever been to. The American Airlines Terminal A is very new and modern and has lots of food and retail options. The half-circle layout of the terminal was excellent because it doesn’t take forever to get from one gate to another. The Skylink stops are very convenient and there are 2-3 in each terminal which is a good way to get from one terminal to the other without taking a bus. Our flight to Miami was out of Terminal C which is another very modern and clean terminal. Overall, it was a nice airport serving the Dallas area.

This airport is absolutely enormous. It is very far from one terminal to the next. Both the monorail system Skytrain and the Terminal Link bus convey passengers to the different terminals. The terminals themselves are very nice and modern. Security screening involved lengthy lines although passengers in wheelchairs get priority. Unfortunately, all the food outlets are airside so it is necessary to go through security screening before getting something to eat or if you are exiting the terminal you must get your food before you leave the airside area and take it out with you. Unlike airports in Asia, there are no smoking kiosks near the gates; the smoking areas are outside the terminals. Immigration is in a huge room which was very crowded when I entered. There were a customs officer pre-screening passengers entering the immigration section. Customs itself was smooth and non-eventful. Baggage claim went fairly quickly despite the number of passengers arriving at the same time that I did. Overall, I was impressed with the system at this airport and would not hesitate to fly through here again.

The Airport which is going under a renovation program called the TRIP. But the airport is still very good and the SkyLink which connects the terminals is also very clean and fast. The terminals are all up to date and my trip was pleasant. I recommend everyone to visit this airport and choose this for your next journey.