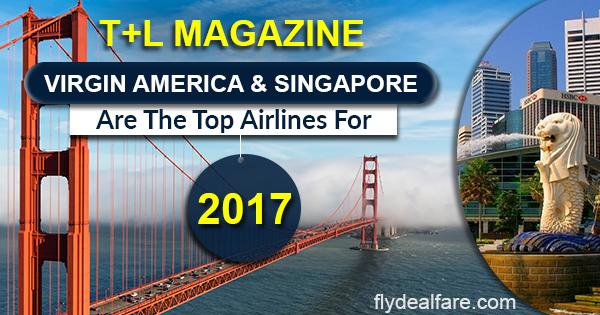 Travel + Leisure magazine has released its data regarding the latest ranking of the airlines last week. And the amazing fact is that Virgin America has been named the USA’s top airline and the airline has achieved the “World’s Best Awards” for the 10th consecutive year for 2017.

JetBlue bags the 2nd position in the annual rating of domestic airlines among the US carriers.

Coming to the top international airlines, Singapore Airlines succeeded in capturing the 1st spot and the airline holds the 1st position in the same category from the 21 consecutive years.

T+L Award is a type of annual consumer-focused rankings covering the airline industry. For the month of MAY, JetBlue and Southwest airlines scored top ratings in the annual J.D. Power customer service satisfaction survey of North American carriers.

And for April, Alaska Airlines ranked 1st for the 2017 Airline Quality Rating report. And according to the international ratings of Skytrax, Qatar Airways captured the No. 1 position after overtaking Gulf rival Emirates.

Coming to Virgin America which is the current winner of the 2017 T+L ratings, the airline is continuously performing well and succeeded in holding the 1st spot from the past 9 consecutive years going back to 2008. The Seattle-based carrier, Alaska Airlines which is also well-liked in the T+L rankings placed at number 3 among the US carriers, ranking between Number 2 holder, JetBlue and Hawaiian Airlines, occupying the number 4 spot.

Talking about the International Rankings, Singapore Airlines and Emirates were selected as the best in the world. The airlines hold the No. 1 and No. 2 positions and both of them are holding the same spots in the T+L ratings since the year 2013. The top 5 airlines include the names like Qatar Airways, Cathay Pacific Airlines, and Japan Airlines. Among these, Cathay and JAL were the new entries, replacing the Etihad Airways and Virgin Atlantic which were previous Number 4 and 5.

The amazing fact in regards to this ranking is that ever since the World’s Best Awards are introduced in the year 1996, Singapore Airlines has won the top spot in the T+L’s category for international carriers every year.

Among airports in the United States, Oregon’s Portland International Airport was named the best for the fourth year in a row. And the airports of Indianapolis, Tampa, Orange County/John Wayne, California and Austin completed the top 5 list. Minneapolis/St. Paul was replaced this year from the last year.

Internationally, the number 1 spot was captured by the Singapore’s Changi Airport for the fourth year in a row. Doha’s new Hamad International Airport enter into the top five in 2017, holding the 2nd place. Dubai (DXB), Seoul/Incheon and Hong Kong round out the international top five listing. Zurich was the airport being dropped this year among top 5.

Although, T+L provides an in-depth explanation of its ratings methodology on its website the magazine stated that the ratings are compiled via surveys of its readers.

The rankings of the T+L magazine are based upon the factors like cabin comfort, in-flight services offered by the airlines, customer service and value.