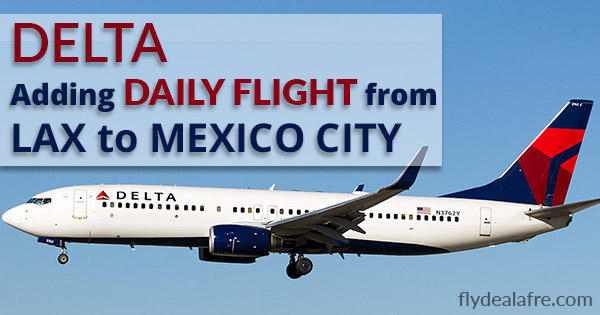 On Monday, Delta Air Lines announced that it is adding a new daily flight service to Mexico City from Los Angeles International Airport. This service will start on December 1st after a 12-year hiatus.

This new addition can be said as the result of a partnership agreement between Atlanta-based Delta and Aeromexico of Mexico City. This will also include five new non-stop flights between Mexican cities and the US.

On this, Ranjan Goswami (Delta’s vice president of sales for the west region) stated that “L.A. is the No. 1 U.S. market to Mexico, and together Delta and Aeromexico offer the absolute best schedule between our hub at LAX and Aeromexico’s hub in Mexico City with 7 daily flights.” He added, “Our combined schedule gives customers access to more choices and 20 destinations beyond L.A.”

Since the completion of relocation at LAX to Terminals 2 and 3 from Terminals 5 and 6 in the month of MAY, this could be said as the first additional flight being announced by Delta Air Lines. The overall relocation process involves a total of $1.9 billion investment of Delta at the LAX in order to modernize the terminal 3 of the airport.

This month only Delta has introduced two more non-stop flights. One of which is a non-stop flight from Pittsburgh to Boston which is going to start from the month of October to meet the rapid increase in the demand from the travelers.  And the second one is a service of direct flights from Boston to New Orleans which will be starting in the next year i.e. 2018.

Coming to the Delta’s Los Angeles to Mexico City flight service, it will depart from LAX at 9:30 am each day. The flight will arrive at Mexico City at 3:10 pm local time. And the flight from Mexico City departs around at 4:30 pm local time and arrive at LAX at 7 pm. For the same, Delta will also use an Airbus A319 aircraft with 132 seats.

Talking about the Aeromexico, it is already offering six daily roundtrip flights in total between the same route i.e. LAX and Mexico City.