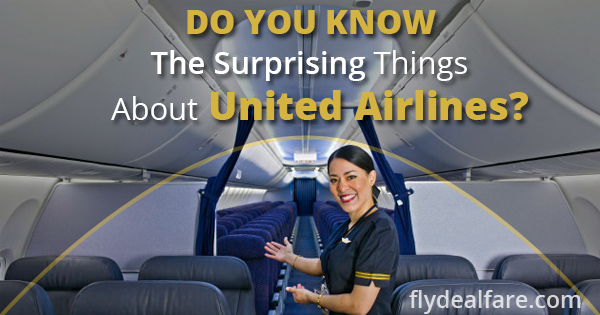 United Airlines has celebrated more than 90 birthdays and have flown over a million miles in “the Friendly Skies” and have no plans to shift that loyalty.

Rather United is facing a crucial time for the last couple of months but it is also true that the carrier is the trendsetter for many things that we take for granted nowadays. Hence, here are the few coolest things, you may not have known about the United Airlines.

As per the annual reports by Idea Works, United Airlines collected the most in “ancillary” revenue in 2015 with a whopping amount of $6.2 billion i.e. £4.8 billion. Then there is American Airlines with $4.7 billion or £3.6 billion and then Delta with $3.8 billion which becomes £2.9 billion.

Last year, United disappoint the passengers by launching a new “basic economy” fare; in simple words, charges passengers to use overhead lockers. And this year too, a few months back the airline is engaged in an incident of forcefully removing the passenger out of the flight to meet the overbooking requirement.

United is the third largest airline on the planet if we consider multiple aspects which include the revenue i.e. $36.5 billion and the fleet size too which is a whopping 738 aircraft. According to a recent report, United is the third most valuable aviation brand name.

There was a time when the Aircraft Crashes Record Office reports the death of around 1,211 passengers in United crashes.

An independent plane safety and product rating website have included the United Airlines in the list of the world’s 20 safest airlines.

Being founded on 6th April 1926 with the name of Varney Air Lines which makes United one of the oldest Airline in the world.

In 1933, United able to conquer the Atlantic in 20 hours with the use of a Boeing 247 which makes the career far faster than its competitors.

The United Airlines has a total of 9 hubs including the Chicago, Houston, San Francisco, Newark, Denver, Washington DC, Tokyo, Los Angeles, and last but not the least Guam.

Rather services to Accra and Lagos were there in 2010 but scrapped later in the years 2012 and 2016 respectively.

After the dragging incident of Dr. Dao recent in April 2017, United offers a whopping amount of $10,000 for voluntary denied boarding.

United Airlines is cutting the red tape for lost bags as in case you permanently miss your baggage, the airline is adopting a “no-questions-asked” policy and will pay $1,500 for the bag and its content.

In the 707’s in-flight lounge, passengers could sit comfortably and enjoy champagne while watching live TV.

After the incident of Dr. Dao, United Airlines introduce a huge compensation of $10,000 for passengers who voluntarily give up their seats.

United became the first U.S. airline to order jetliners with a $175 million order for 30 DC-8s as the carrier acquired Capital Airlines which is the first airline to fly jets in the year 1961.

With Boeing’s first “fly by wire” aircraft, United Airlines was the first carrier to introduce the 777.

In 1997, United and the other airlines like Lufthansa, Air Canada, SAS and Thai International founded the Star Alliance which is the first global airline alliance.