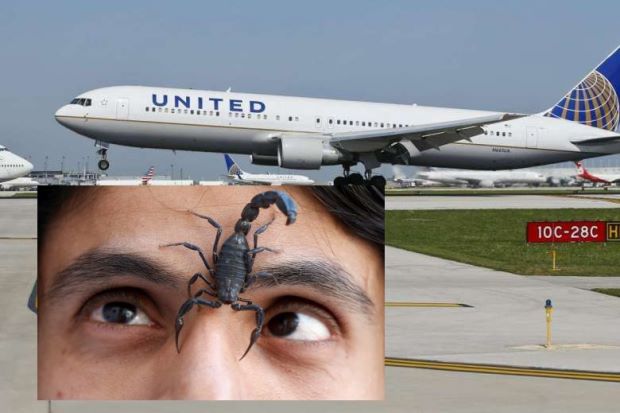 Houston: On this Thursday evening at George Bush Intercontinental Airport, A United Airlines flight was delayed. And the reason behind that was a scorpion which was spotted on the plane.

This was the second time in a month that the passengers witness stinging insects on a United aircraft.

A scorpion reportedly crawled out of a passenger’s clothing on Flight 1035 as the flight was preparing to take off from Bush and travel to Quito (Ecuador) as per the United Airlines. The paramedics examined the passenger and he had not been stung and was completely fine.

Rather it is still not clear whether the scorpion was ever found. The flight 1035 eventually took off around 3½ hours late to Ecuador.

On this incident, the United Airline issued the following statement on Thursday evening:

“Houston to Quito Flight 1035 returned to the gate after a scorpion reportedly emerged from a customer’s clothing. Paramedics at the gate immediately examined the customer and determined that he had not been stung.”

“The customer declined further medical treatment and as a precaution, a new aircraft was arranged. We provided all passengers with a meal voucher due to the delay and the flight, with the customer aboard, has departed for Quito.”

This was not the first incident when passengers suffer due to a crawling insect in the plane as on 14th of April 2017; another man was stung by a scorpion on a United flight from Houston to Calgary and now this.

United has been facing a lot of complications these days after a passenger was dragged by aviation police off a United Express flight on 9th of April leaving him with a concussion and two broken teeth. And a new incident came on that United Airlines canceled the flight of an Indian-origin passenger just because he was filming a dispute involving an employee of the airlines.

All these incidents have happened in the past few months are not beneficial for the image and the reputation of the respective airlines.