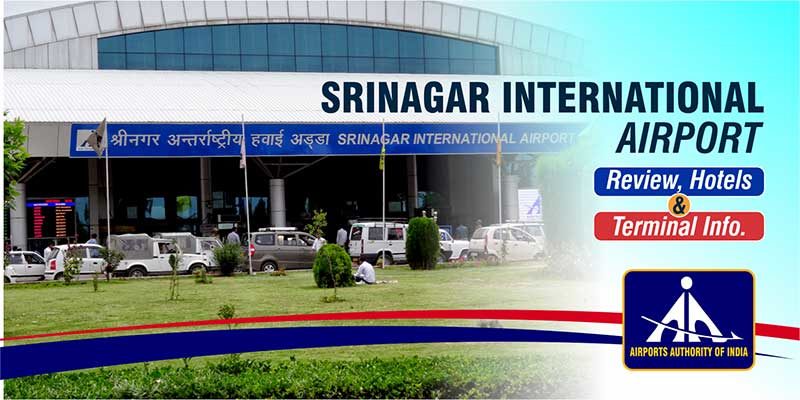 Srinagar Airport is an international airport that serves the summer capital of Jammu and Kashmir. Being owned by the Indian Air Force, the Airports Authority of India operates a civil enclave at the airport.

The airport holds the title of an international airport in the year 2005 but has not served any international flight until November 2016. Despite that, it does support Hajj flights. The airport comprises an integrated terminal and one asphalt runway. Along with that, it also supports the bus and taxi service to the different parts of the city. The Srinagar Airport code is SXR.

The international airport in Srinagar comprises of following 2 terminals:

The domestic terminal is also known as the terminal 1. It supports the operations of all the local and regional flights within the country.

Along with that, there are also flights to Jeddah specifically on the Hajj season in which there is a high rate in the number of pilgrims in the Jammu & Kashmir region (as around 70% of the population is Muslim over there).

The International terminal at the airport is also known as the terminal 2. This terminal regulates the flights all around the world from the airport.

The airport is known for its high security so the foreign travelers do need to register once arrival and depart.

Initially, the airport was used for the military purpose several times because of the major conflicts which took place in Jammu & Kashmir region after the Pakistani War and Kargil War.

In the year 2005, the government of India gave the status of the international airport to Srinagar Airport. After that, it operates international as well as domestic flights.

Passengers can enjoy the provision of shuttle services at the airport, connecting both the terminals.

Passengers can pick from the following options of hotels available at Srinagar International Airport.

Currently, there is no lounge available at the Srinagar Airport.

Due to lack of any direct connection between the airport and the city center, passengers may need to suffer a little. The nearest railway service is available 14 km away from the Airport.

Coming to the bus service, there is the availability of a single bus line at the airport. This will help you to reach directly from the airport to the city center. It includes the following options:

There is the availability of car rental facility at the airport. You can connect to options like Kashmir Car Rental, Srinagar Airport Taxi, and Srinagar Car Rental.

You can find these car rental companies at the respective booths in each terminal.

There is also the option of booking a car online through the search engine for the passengers.

The Srinagar Airport became the international airport in the year 2005 only. Hence the International Terminal was built at the airport which supports 5 more parking stands. This increases the number from four to nine. At the airport, the total car parking capacity is for 250 vehicles. Passengers can easily select from the following parking options like drop off, short-term stay, and long-term stay.

Travelers can easily enjoy the free Wi-Fi facility at the Srinagar Airport for up to 30 minutes.

In case, you need any cash; there are a number of ATMs and cash machines available throughout the terminal. You can find them outside the terminal building and in the Departures areas of the terminal.

In case of any emergency, medical aid facility is available at the airport which you can ask for anytime. For additional information, you can check the Srinagar Airport website.

Yes, the facility of currency exchange is also there at the airport.

For passengers loving shopping, there are a lot of options available at the airport. You can purchase stuff like leather goods, shoes, and handicrafts from small shops in the Departures area.

Passengers in case of any doubt or query can reach the information counters located in the Arrivals areas of the Domestic and International terminals.

Srinagar Airport is quite an experience but then so is the whole of Kashmir for Europeans traveling there. The airport is currently in the process of being rebuilt so arrivals are processed in what can only be described as a shed. Departures use the half-finished terminal where it is impossible to hear announcements due to the deafening construction noise. There is dust and noise everywhere although it looks as if it might be quite nice when it’s finished! Be prepared to be repeatedly screened monitored searched and grilled every couple of steps along the way by a mixture of airport staff troops and military police and don’t expect them to be polite or friendly – they are not.

An Airport with tight security and usually Airport road is overcrowded. I suggest passengers leave in time. Parking lots are quite big and you can take a walk around.  The seating area is nice and small. The extensions are in progress.  Cafe Coffee Day and some other good food stalls are available at the airport. Bookstalls and cloth stores are also available. Overall a nice place with the nice weather.

It is a small airport which doesn’t give a feeling of the airport.

The landing procedure is finished quickly and outside you can witness pin drop silence and army personnel in every nook and corner.