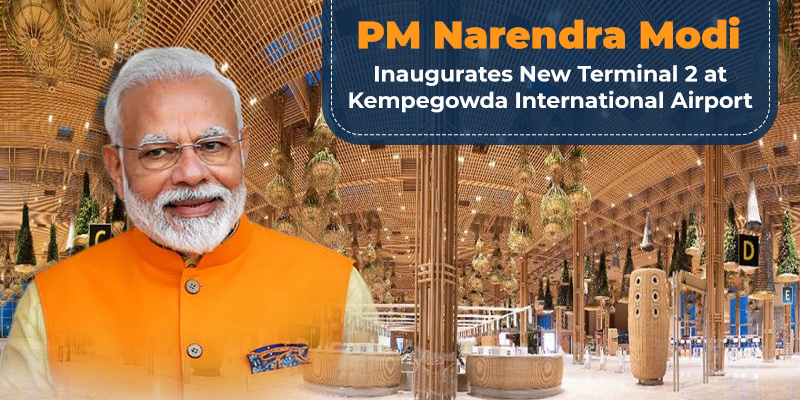 The new Terminal 2 at Kempegowda International Airport at Bengaluru has been inaugurated by the Prime Minister of India it was built at a cost of Rs. 5000 crores.

As part of the inauguration of the new terminal 2 at Kempegowda International Airport in Bengaluru, Prime Minister Narendra Modi made a statement. At a cost of about Rs 5,000 crore, the new state-of-the-art terminal at the Bengaluru International airport is one of the most lavish airport terminals in the world. With the inauguration of T2, the passenger handling capacity as well as the number of counters for check-in and immigration will be doubled, which will make a great deal of difference to the people.

A brief background about the Terminal 2 at Kempegowda International Arirport.

Kempegowda International Airport’s Terminal 2 is being constructed at a cost of around Rs. 5000 crores. From the current capacity of 2.5 crore passengers per year, the terminal will double that to 5-6 crore.

Sustainable principles have been woven into the design of Terminal 2 to make it as environmentally friendly as possible. It is anticipated that Terminal 2 will be the largest terminal in the world to be pre-certified platinum rating by US GBC (green building council) prior to the operator putting the terminal into service based on the sustainability initiatives.

All of the artwork commissioned for Terminal 2 are based on the theme of ‘Naurasa‘ which ties all the works together. Besides reflecting the rich heritage and culture of Karnataka, the artworks are a reflection of the broader Indian ethos as well.

Book your USA TO India flights and enjoy the magnificent view of the Terminal 2 at Kempegowda International Arirport.

As a whole, the design and architecture of Terminal 2 have been influenced in part by four guiding principles: terminal in a garden, sustainability, technology, and art & culture. It is important to note that all of these aspects portray T2 as a terminal that is modern, yet rooted in nature and offers a memorable destination experience to all travellers of all ages.