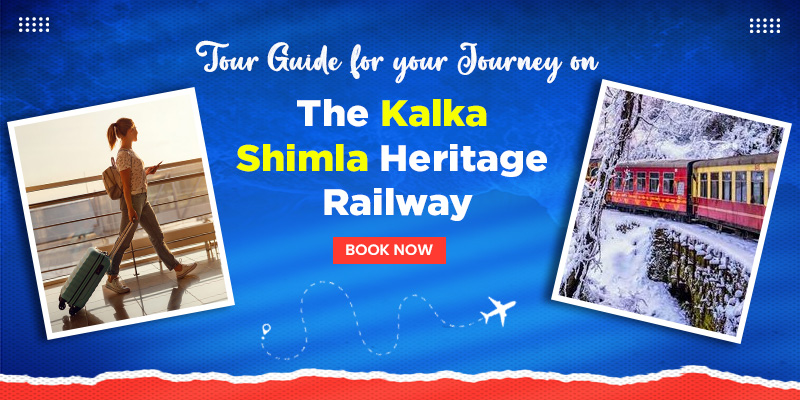 Kalka Shimla heritage railway is one of the marvels of history and an epitome of mind-blowing engineering. Kalka is a small town nestled in the foothills of the Shivalik Himalayas. It’s quite famous for the religious shrine of the great Hindu Goddess Kaali. Apart from that, it serves as the northern terminus of the Delhi-Kalka line as well as the starting point of the Kalka-Shimla railway.

Not to mention, it is one of the 40 UNESCO world heritage sites in India. That’s one particular reason why it is so famous across India and globally as well. One surely cannot miss the opportunity to explore and experience the grandeur of visiting Shimla in this majestic train. FlyDealFare has brought for you a comprehensive blog to help you get a clear idea of how you can reach here and enjoy this wonderful train journey.

Why Is Kalka-Shimla Heritage Railway So Special?

The Kalka-Shimla railway track was one of the most important projects of the Britishers. The construction work began in 1898 under the aegis of H.S. Harington. Furthermore, it took just five years to complete the construction and in 1903 the maiden journey was completed between Kalka and Shimla. Since then the trains have been running non-stop from Kalka to Shimla on this railway track. For illustration, the train is popularly known as a heritage train running at a decent rather slow speed of 20km per hour. That’s because the railway line is a narrow gauge track in a hilly terrain which necessitated it to have a slow moving train.

The distance is approximately 96 Km from Kalka to Shimla and the track has over 102 tunnels. Besides that, the railway track spans over more than 800 bridges. The whole journey offers great opportunities to immerse yourself in the beauty of picturesque views in this Himalayan terrain. In fact, it is indeed one of the most unique and heartwarming train journeys one can experience. It’s hard to put in words how beautiful it is and how meticulously it has been created by men. If you are traveling from USA, you can book cheap flight tickets to India with us and we will help you get the best flight deals.

Another important thing that must be remembered is the rail network also holds a world record. Yes, that’s true! It made it to the Guinness book of world records for steepest rise from 600m to 2100m in its 96 km span. Just after departing from the Kalka railway station, the rail begins to climb uphill. Whistling through the deodars, pines, ficus and maple trees in the Shivalik hills, it makes its way to the “Queen of Hills”. On the journey you’ll come across gothic-style bridges and also witness a conspicuous change of vegetation. Let’s elucidate about the number of trains plying and some important factors you should consider while you embark on this wonderful journey.

Trains And Their Schedule

Total five trains are running in a day between Kalka and Shimla. With two passenger trains, additionally, there are three luxurious trains running on the track.

It is one of the most premium trains to Shimla with carpeted floors. Moreover, it has large and wide window frames, comfortable seats and a great music system for the passengers. To ensure that passengers have a pleasant travel experience, toilets are completely upgraded with all the modern amenities. The capacity of the train is 120 people which offers facilities such as a pantry and food for the passengers. Barog is the only stoppage point of the trains and one of the iconic stations on the railway track. The longest tunnel (Barog Tunnel) is also just one kilometer behind this railway station. You can sit and let yourself feel the magic of nature engulfing you in its sheer joy aboard the Shivalik Deluxe Express. Make sure you check our USA to India flight deals if you want to book cheap international flights.

The Himalayan Queen is a standard train offering low-budget tickets for its first and second class coaches. It makes a stop at almost every station on the way to Shimla. To enumerate, there are 19 stations between Kalka and Shimla. Another point that needs to be considered is that you don’t get food on the train. However, you can definitely buy some delectable food items at the stations on the way. Usually the stoppage time at the station is just about 10 to 15 minutes.

The rail motor car is a distinct category train of the Kalka Shimla railway. In fact, its model and appearance certainly enshrines a memory of the past as the design is similar to the buses from the 2nd World War era. The glass rooftop lets you get a better glimpse of nature which puts you in good spirits as soon as you get onboard. It’s indeed a thing of beauty running relentlessly on the Kalka Shimla heritage railway. However, it must be remembered that the train can only accommodate 14 persons in total. Passengers also get a chance to book the whole railcar when it’s present at the station at any particular time. Passengers can also have food and eating facilities inside the train.

To summarize, we can say that these were some of the crucial aspects and facts about the Kalka Shimla heritage railway. We hope this little piece of information will definitely do you some good. After all, it’s one of the most famous railway lines in India from the prehistoric times. It’s no surprise why so many people look forward to booking their train tickets for their journey to Shimla. Shimla is famous for its natural beauty and is an absolutely magnificent hill station. There are certain famous attractions this city offers and you will surely love the vintage feel it provides. However, for that you will have to book your flights and get here first!

We have seen thousands of people traveling from USA to India and visiting Shimla. Although there are many other ways to reach this lovely hill station, boarding a train from Kalka has its own charm. In short, we can say that it is unequivocally the best way to explore the scenic beauty of the Shivaliks. So the next time you plan to visit here, do not miss embarking on a delightful train journey to Shimla from Kalka. With this in mind, if you are concerned about booking cheap flights to India from USA, get in touch with us. Last but not least, make sure you book your flights well in advance to avoid any inconvenience.