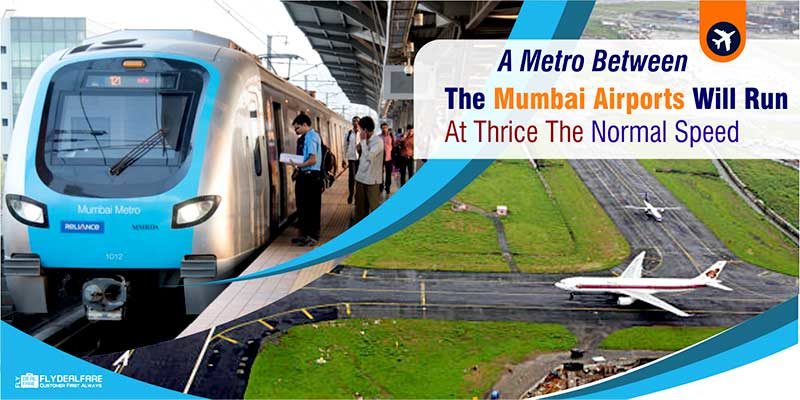 The dedicated Metro corridor serves the passengers of two international Mumbai airports i.e. the Chatrapati Shivaji International Airport in Santacruz and the Navi Mumbai International airport. There is a total distance of around 40 km between the two.

Now the trains connecting these two will run at thrice the speed of a normal suburban Metro service. This is done to provide direct high-speed rail connectivity to passengers and save their time too.

Mumbai Metropolitan Commissioner U P S Madan stated that the plan was to run services providing a maximum operating speed of up to 90 km per hour along the Airport Metro corridor. The plan considers the direct high-speed rail connectivity between the airports but the detailed project report of the high-speed corridor is still in the final stages of preparation

The corridor will run underground for the first 8-km route starting at the Santacruz airport and will come along the Ghatkopar Mankhurd Link Road.

The main reason to take such a huge step is to bring down the peak-hour travel time between the two airports to 40 minutes from 120 minutes.

To save time there will be lesser stations available at the airport Metro corridor. There is planning of one station for every kilometer along other suburban Metro rail lines.

As per the officials, the financing model for the new line is yet to be considered. Talking about the preparation of the DPR, it is still in final stages. According to estimates, the Airport Metro would cost at least Rs 18,000 crore.

Hence the state government is investing the direct capital in the Metro rail projects for now. The project cost will be shared by the MMRDA and CIDCO i.e. Industrial Development Corporation of Maharashtra Ltd. The government has plans to extend a subsidiary loan for the project as its share in the project.