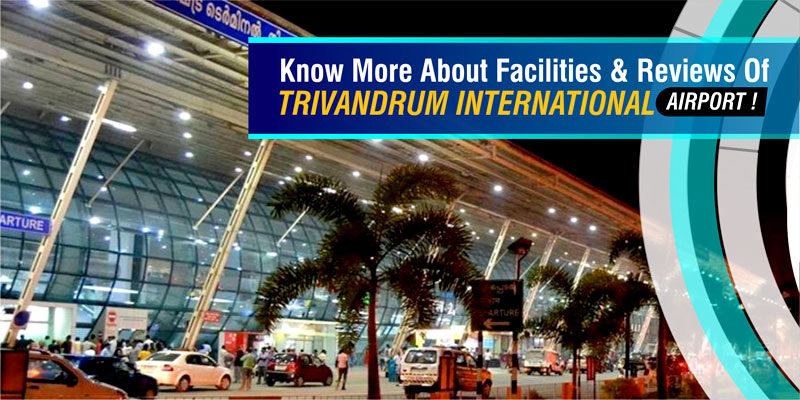 Trivandrum International Airport is situated in the state of Kerala, India. This international airport serves the cities of Trivandrum, Kanyakumari, Nagercoil, and Kollam. It is considered as the fifth largest airport in India, Delhi’s IGI airport is on the top at present. Being declared by then Prime Minister of India, V. P. Singh in 1991, the airport is a primary base for Air India Express operations too. The Trivandrum airport code is TRV.

Trivandrum International Airport operates two terminals in total. The terminal 1 handles all the domestic flight operations and Terminal 2 handles the domestic flights by Air India along with the international flight operations. Talking about the distance, the TRV airport terminal is approximately 3.7 km due west of the city center. The airport supports the flights to Middle Eastern as well as Southeastern countries.

Talking about the number of terminals at the Trivandrum Airport, there are two terminals.

The Trivandrum airport terminal 1 at the airport regulates the operations of domestic flights, except Air India and Jet Airways. The terminal is spread over an area of 99,000 sq ft and can easily support the activities of more than 400 passengers at a time.

At the domestic terminal, you can witness the basic amenities only like the cafés, a beer and wine bar, a book-seller, free local calls, phone-recharging points, and more.

Coming to the Trivandrum airport terminal 2, it manages the international flights along with all the domestic flights of Air India. It is fully air-conditioned along with the Wi-Fi facility for the passengers. The international terminal ground operations are handled by Air India SATS Airport Services Pvt. Ltd. and Bhadra International India Pvt. Ltd. 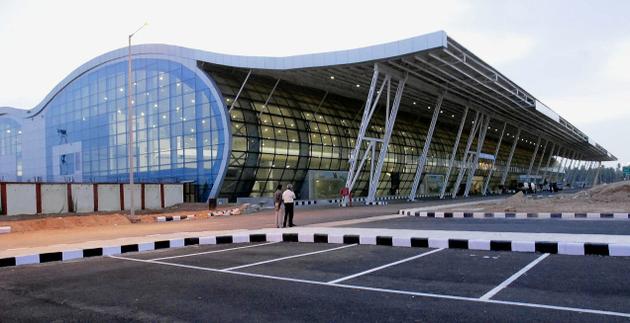 Here you can also find the facilities like spacious lounges, natural lighting with the extensive use of glass roofing and better conveyance facilities for passengers. There are also three baggage carousels and immigration/customs facilities. The duty-free shop at the terminal is managed by Flemingo i.e. India’s first privately owned duty-free operator.

Following are the list of hotels nearby the Trivandrum airport: 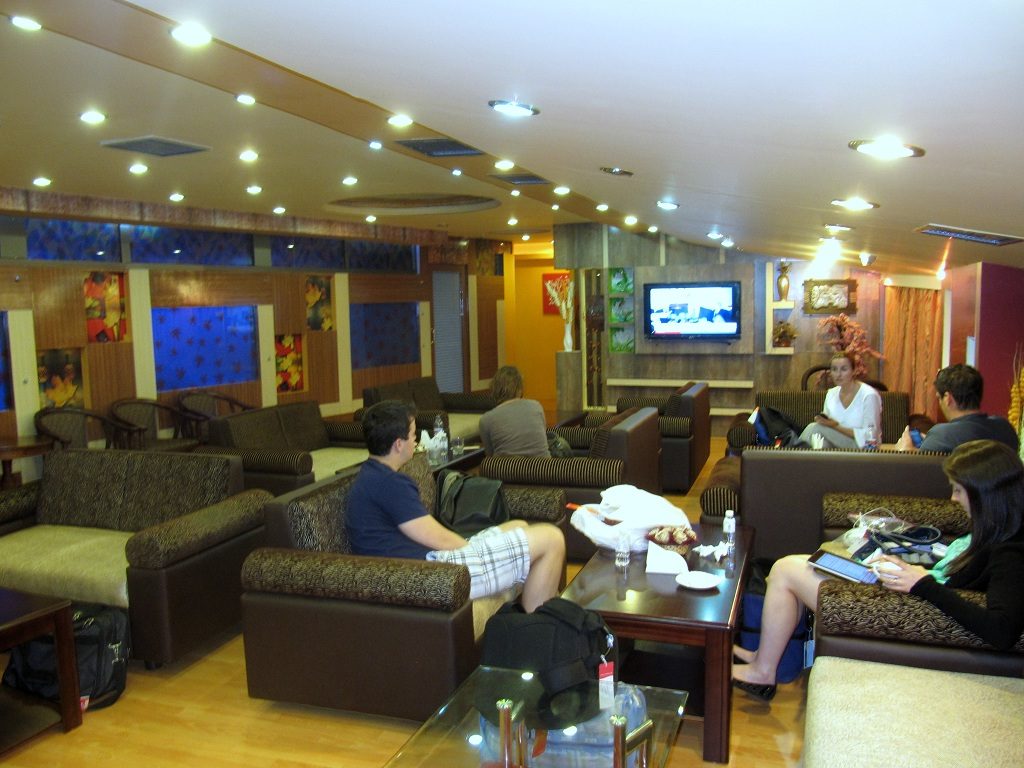 Following are the number of facilities available at Trivandrum Airport.

There is the availability of Wi-Fi facility at the airport. You can avail it at the Ruby Arena Silver Castle Lounge. In addition to that, the airport also has Cyber Cafes located in Terminal 1 and 2, Airside.

Talking about the bus service, there are multiple buses connecting Trivandrum airport to different parts of the city. These types of services are mainly operated by the Kerala State Road Transport Corporation. It connects the airport to East Fort, Kochi, Kollam, and other areas.

When it comes to the rail facility from the airport, the nearest railway station is Kochuveli railway station. It is around 5 km away. Within the 5.5 Km, there is Thiruvananthapuram Central railway station too. The main point is that these railway stations are well connected with different parts of the country.

The airport also supports the Chipsan Aviation air charter services which are operated by Helitaxi service from the airport to the various locations.

You can avail the services of pre-paid taxis at the airport. These are available from both the terminals of Trivandrum airport. Along with that, the taxi aggregators Uber and Ola are within the service area.

Passengers can easily get the glimpse of child care rooms or kids play areas at the airport. It is located at the terminal 1 (Airside) as well as at terminal 2 (Check-in Area). 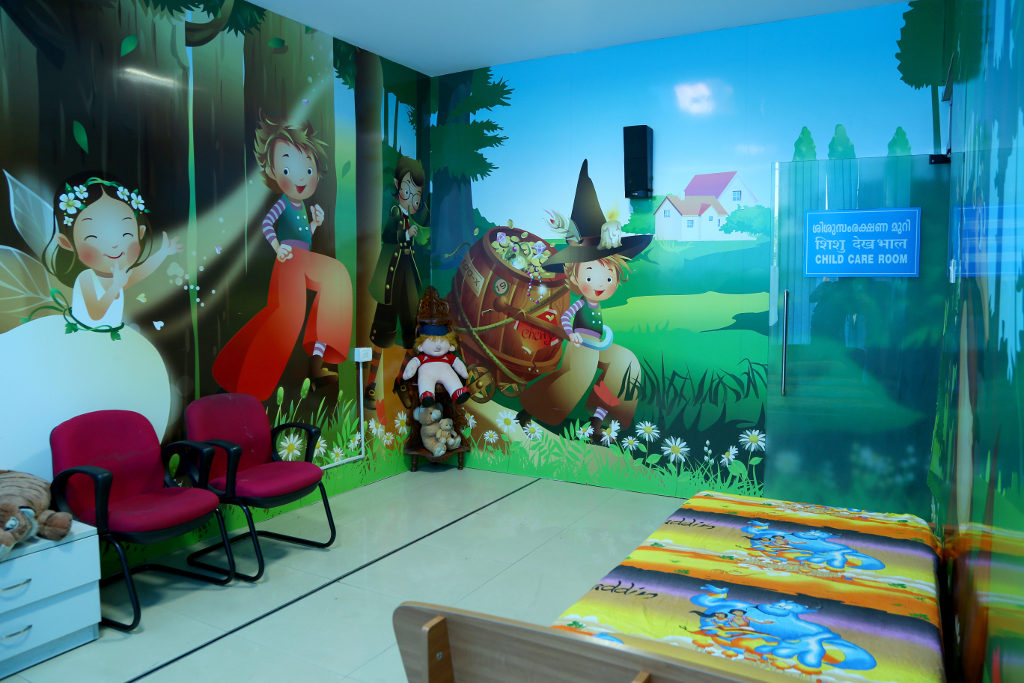 You can also find the currency exchange services at the domestic terminal of the airport.

For those who love to shop duty-free products, they can find a number of such shops at the Terminal 2 of the airport.

Talking about the eating options, ‘Cyber Café’ services are there which serves light snacks. It is available on both the terminals of the airport.

For any medical emergency, there are medical services available at the airport. It is located in both the terminals. At Terminal 1, it is available during flight operational times and at Terminal 2 also.

According to Skytrax, following are the reviews on the Trivandrum Airport:

I feared for the crush at the queuing point but I haven’t faced such situation. For an early morning flight, the only short delay was getting into the terminal (like all Indian airport terminals you have to show your flight documents). After the check-in immigration security procedure went on smoothly without any problem.

The area around the airport seems clean and pretty organized. But that lasts only until you reach the terminal’s gates. Without e-ticket printed in advance, you won’t be allowed to enter the terminal. The security is oppressive and unintelligent. The terminal is quite spacious along with the modernistic and pleasant looks. Even if I had an already printed boarding pass for online check-in I actually waited much longer than other passengers as their system wasn’t working and they had to check me- in again. There were around 10 passengers for 3 members of staff at a time and they seemed totally overwhelmed despite the low volume of passengers. The Trivandrum airport departures level was pretty empty and immigration a breeze as it was very early morning. The airside area didn’t offer anything special but was clean and pleasant nevertheless. No AC sockets working anywhere in the airport. The entire airport seems to be more about looks than substance. TRV remains the best airport I ever experienced in India and I would advise everyone to pick this alternative gateway to other airports in the South.

Most of the visitors to the airport are NRI returning home. So, issues like good shopping and dining don’t matter much. As an NRI, I look for ‘fast’ processing whether it is Trivandrum airport arrivals or departure. In this regard, TVM airport gets top marks. It is easy to drive into the airport and it also have very good parking space too. Stuff like ticketing, security checks, and immigration are quick. Plus, the airport staff do not hassle you as long as you have your valid documents ready. It is not a ‘fancy’ airport but I am very proud of it.