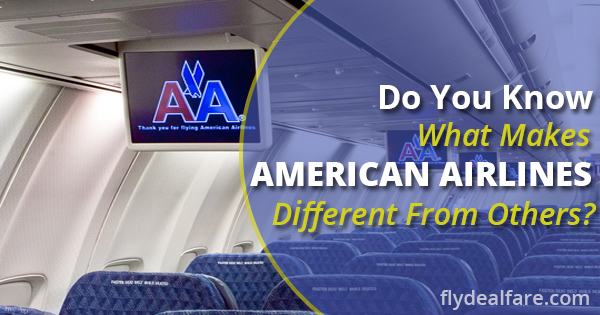 Multiple passengers who are frequent fliers taste the services of different airlines and probably have their one favorite flight. Hence they used to travel in the flight of that particular airline for the next journeys also.

Talking about the American Airline which is one of the largest airlines in the US, several passengers travel through its different flight daily and just are curious to know about every single interesting thing related to it.

Following are some of the amazing stuff attached to the American Airline which probably many of its frequent fliers don’t know:

NUMBER 1: American Airlines has the biggest fleet in the world:

A fascinating feature of the American Airlines is that it supports the largest fleet in the world. The airline would certainly claim this for the next couple of years unless its competitors, Delta and United are going to merge. More than 1,500 airplanes are part of the fleet. AA is also the second largest airline in the world in terms of destinations served after United.

NUMBER 2: Dallas-Fort Worth is the main hub of American Airlines:

American Airlines has its headquarters in Forth Worth, Texas. By handling more than 51 Million passengers annually and offers many international flights, Dallas Fort Worth it the biggest hub for the American carrier.

NUMBER 3: There is a Movie made about the American Airlines:

There is also a movie made under the Hollywood production “Up in the Air” featuring George Clooney. The movie is about a man who is trying to reach 10 million miles in order to reach the American Airlines Consecutive Status.

NUMBER 4: Dallas to Hong Kong is the longest AA flight:

AA also has one of the longest flights in the world which is on daily from Dallas-Fort Worth to Hong Kong. The flight time takes about 16 to 17 hours and is operated by a 777-300ER. It is also considered as the headquarter of many international companies and the financial heart of the biggest continent on Earth.

In the year 2011, American Airlines placed the biggest order ever in aviation history. AA purchased 460 Boeing 737 ‘Next Generation and Airbus A320 in order to renew the short and medium-haul fleet. Along with this, the MD80 is going to be replaced until the end of 2022.

NUMBER 6: American Airlines Gets the Bulk of Its Business From Fliers Who Travel Once a Year:

One of the interesting and unbelievable facts about the American Airlines is that the airline earns 50 percent of its revenue from people who fly once a year or less unless what most of the people think that it may earn money from the business-related travelers who jet-set all over. But in reality, that’s not true!

NUMBER 7: AA’s Biggest Competitor is not what you expect:

The majority of the passengers believe that the airlines like Delta and United are the biggest competitors of American Airlines but this not true. In reality, airline’s biggest competitor is Spirit Airlines because Spirit offers similar routes at equal or lower prices.

One of the unbelievable facts attached to the formation of American Airlines Company is that it came about from a conglomeration of 82 other airlines. It has undergone several more emerging and its most recent one was with U.S. Airways.

C.R. Smith and Donald Douglas developed the DC-3 plane under the Douglas Aircraft Company. The plane is a type of fixed-wing propeller-driven plane and AA was the first time airline to use it in the year 1936.

NUMBER 10: American Airlines Was the First Airline to Profit From People:

At the time the airline was created, it was solely used to transport mail just like other airlines. But anyhow, AA was the first to avail profit from carrying passengers without any mail.

Nowadays, lounges are quite popular in airports in order to provide comfort and relaxation to the members. But these lounges are introduced or came into existence by the AA. It airline launch its very first lounge named Admirals Club at New York’s LaGuardia airport.

NUMBER 12: AA has offered its Planes to Filmmakers for Free:

In today’s time, renting planes for films comes with a steep price. But in 1951, AA lent one of their planes to producers for the film Three Guys Named Mike.

NUMBER 13: American Airlines was the First Airline to Use Electronic Booking:

NUMBER 14: AA is using the Same Logo from nearly 50 Years:

The iconic eagle logo of American Airlines’ was introduced in the year 1967 and was designed by Vignelli Associated. The interesting fact is that the airline is using the same logo all the way until 2013.

NUMBER 15: AA hired a Female Pilot before Any Other Major Airline

The trend of appointing female pilots is also introduced by the American Airlines as it was the first major airline to hire a female pilot, named Bonnie Tiburzi.

The headquarters of AA is located in Texas and it comprised two large office buildings. And together, the buildings contain about 1.4 million square feet and need more than 4,000 employees to maintain it.

Basically, airlines need a lot of water to operate. But when it comes to American Airlines, it recycles water for washing planes, rinsing tanks, and irrigation in order to prevent water. Since 2002, the airline’s this effort has saved them over one million dollars.