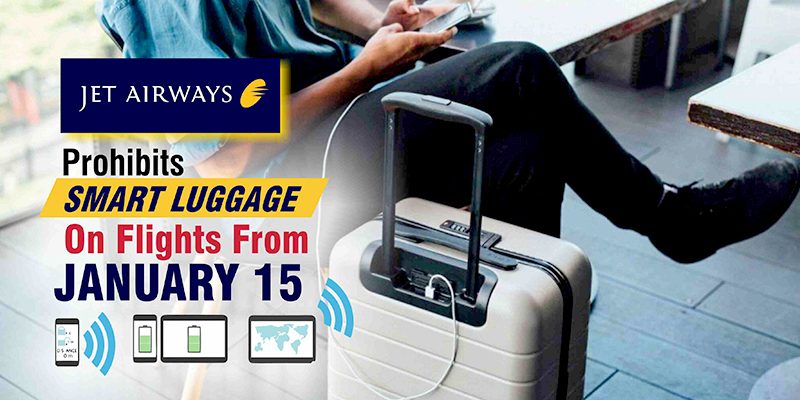 The major Indian international full-service airline; Jet Airways has declared that it will prohibit passengers from carrying smart luggage. It is believed that the airline is following the direction of the global airline grouping IATA which led to a number of airlines to ban the carrying of smart bags. This will include all the devices with non-removable batteries, on its aircraft from 15th of January.

According to IATA, the smart bags or luggage containing lithium batteries, GPS, GSM, Wi-Fi technology, motors, power banks, and more stuff like that are totally restricted. But if the lithium battery can be removed from the bags, then these are accepted.

IATA; International Air Transport Association recently banned the carrying of such baggage on a passenger aircraft across the world. And this move can be seen as the result of that only.

In a statement, Jet Airways mentioned that “In accordance with the regulations issued by the IATA towards ensuring flight safety, smart bags or smart luggage which include devices with non-removable batteries, will not be permitted on all our flights, effective January 15.”

To check-in for their flights, passengers are advised to remove batteries from their smart luggage.

“The liability of the airline and its staff is limited to the extent of only advising and guiding guests to ensure compliance with these procedures.” – Stated by the airline.

Plus you must be aware of the fact that the airline will not be liable for any kind of damage or malfunction of the smart luggage in any form because of the un-installation or re-installation.

Do You Know The Facts About The 2nd Best Airline Of India, Jet Airways?