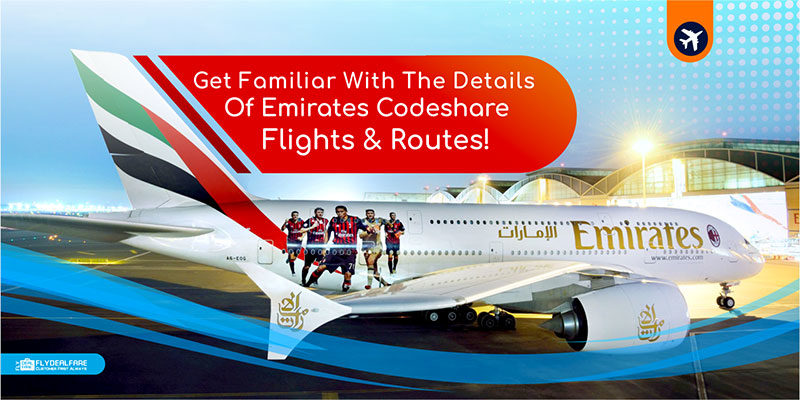 There can be a number of reasons why the participating airlines present a common flight number under a code-sharing agreement.

Probably, the several benefits of code-share agreement let the airlines to engage in such a thing. It helps the passengers as well as proves beneficial to carriers too. By providing the passenger’s various route options, it allows them to book travel from one to three through point two under one carrier’s code only.

For the airlines, it provides a good way to not serve their operations or aircraft on a given route to gain exposure in the market through the display of their flight numbers.

Here we are discussing the list of Emirates Codeshare Flights:

Talking about the codeshare flights operated by the Alaska Airlines, it serves its services to a number of cities. This includes around 44 cities via Seattle, six cities via Los Angeles, three cities via San Francisco, three Cities via Boston and to Seattle via Houston and Orlando.

Alaska Airlines also has codeshare International flights between Canadian cities and Seattle. The carrier merges with Emirates and places its code to Vancouver via Los Angeles.

Jet Airways also listed in the Emirates codeshare flights on daily basis. It covers the route from Dubai to Mumbai along with Delhi.

When we talk about the Emirate codeshare partner JetBlue, it includes flights between both Emirates US destinations and JetBlue destinations. It serves its services across the US, Caribbean, and Mexico.

Following are the details of the domestic and international routes:

Emirates also has codeshare partner with Thai Airways International of weekly flights between Dubai and Bangkok.

Emirates operates codeshare flights to 14 domestic Canada routes beyond Toronto to and from Ottawa, Regina, Vancouver, Calgary, Moncton and more.

The codeshare flights are also available via London Gatwick to and from Vancouver, Calgary, Toronto, Edmonton, Winnipeg and Saint John’s in Canada.

Following are the details of Emirates flights codesharing with South African Airways:

There are also connecting flights to and from Malaysia via Dubai to and from Barcelona, Riyadh, Madinah, Paris, Kuwait, Zurich, Hamburg, Toronto, Munich, Stockholm, Rome, Madrid, Frankfurt, and others being operated by Emirates.

There are Emirates codesharing links with the Jetstar Airways on 20 domestic Australian routes. It also includes 5 domestic routes of New Zealand and 5 Trans-Tasman routes and between Singapore and Bali.

Emirates too have a codesharing agreement with the Copa Airlines and operate flights between Rio De Janeiro & Sao Paulo to Panama City.

There are two flights between Dubai and Mauritius on daily basis operated by Emirates.

In addition to that, there are connecting flights to and from Mauritius via Dubai to and from Cairo, Dammam, Colombo, Jeddah, Riyadh, and Karachi.

There are codeshare flights available for the passengers by Bangkok Airways to South East Asian destinations and domestic Thai routes.

Other available codeshare flights from Bangkok are to Chiang Mai, Chiang Rai, Krabi, Phuket, Lampang in Thailand. Plus, Siem Reap & Phnom Penh in Cambodia and Luang Prabang & Vientiane in Laos.

There are codeshare flights available to Chiang Mai, Koh Samui and Utapao (UTP) in Thailand from Phuket.

In addition to that, there are flights available to Koh Samui from Singapore in Thailand.

Lastly, you can also get the glimpse of share code flights from Kuala Lumpur to Koh Samui in Thailand.