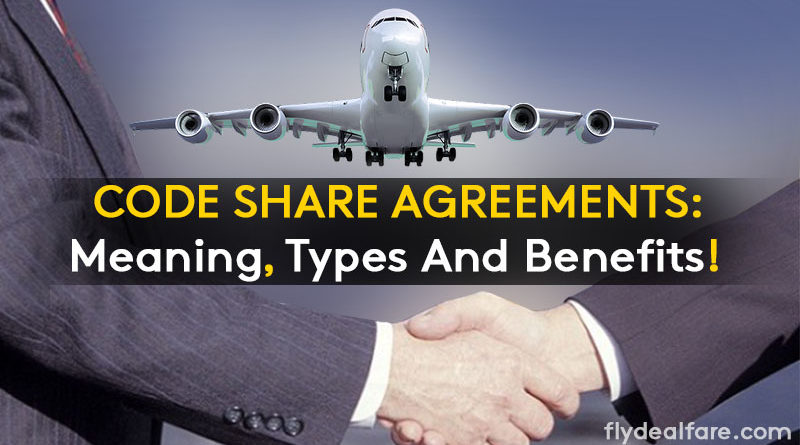 WHAT IS CODE SHARING?

Code sharing is a type of marketing tool or arrangement that allows the airlines to place its designator code on a flight operated by another airline and sell tickets on behalf of that airline. In simple words, airlines present their product to travelers as a seamless travel itinerary.

For example, passengers appear to travel through the XX Airline but eventually, it is the YY Airline who is operating the flight.

Airlines throughout the world are engaged in different code-share agreements. This will strengthen the market presence and competitive ability of the airline. There is a requirement of authorization from the Department in the form of a Statement of Authorization under Part 212 of the Department’s economic regulations, 14 CFR Part 212 for the US and foreign air carriers if they want to operate code-shared services.

The Department usually approves the application if it is in the public interest.

Difference Between Code-share And Interline Agreement:

Interline Agreements is another term whose meaning is slightly different from the Code Sharing Agreement. Basically, as discussed above, Code sharing is a type of commercial contracts between the marketing and operating carriers. On the other hand, Interline Agreement is a type of contract between the airlines. It facilitates travel for passengers who require flights with more than one airline to reach their final destination.

The Interline agreement allows each airline to accept the other’s ticket and covers baggage transfers and liability. Just like the code-sharing list of airlines, there is also different airlines’ interline agreement list.

Commonly, there are 3 types of code-share relationships or agreements.

One of the most common types of code-share is the Free-share which is also the most difficult to manage from the airlines’ point of view. In this type of agreement, both the airlines establish a contract to publish the other carrier’s flights its own. This type of agreement mainly includes no restrictions or very fewer rules regarding a number of seats it may sell on the flight, within capacity constraints.

This type of codeshare agreement is less formal than the other types of contracts on the basis of revenue sharing. This type generally covers a number of partners’ flights and is very broad. In this case, the operating carrier has most of the control on stuff like schedule changes, seat assignments, etc

Example: United and Lufthansa, American and US Airways

The 2nd type of the code-share agreements is the Block-Space. Code-sharing agreements are the simplest way for the airlines to provide access to a market without entering into a free sale agreement. In such case, the block-space agreement is used especially when the participating airlines are not in the same alliance. It is a complex type.

Talking about the operating carrier, it has no idea who has been booked under the marketing flight number. The operating carrier is not aware of the number of passengers booked too. That’s why this type of arrangement is referring to as free sale, but it is very useful for carriers in many cases.

There is also a less common type of the block space agreement i.e. ‘soft’ blocked-space arrangement. In that, the marketing carrier can return unsold seats to the operating carrier.

Example: United and Skywest, Air France and CityJet may be the Code-share agreement examples for this type.

The code-share agreement helps the passengers by providing them clearer route options and allows them to book travel from one to three through point two under one carrier’s code. This proves beneficial if the customer books from point one to two under one code and then from two to three under the other code. This thing saves the time of the passengers which the need to spend between the connecting flights.

Flights from both airlines that fly the same route offer an apparent increase in the frequency of service.

These types of agreements provide a good way for the carriers which do not serve their operations or aircraft on a given route to gain exposure in the market through the display of their flight numbers. It is also true that when an airline sacrifices its capacity to other airlines as a code share partner, its operational cost will generally be reduced to nil.