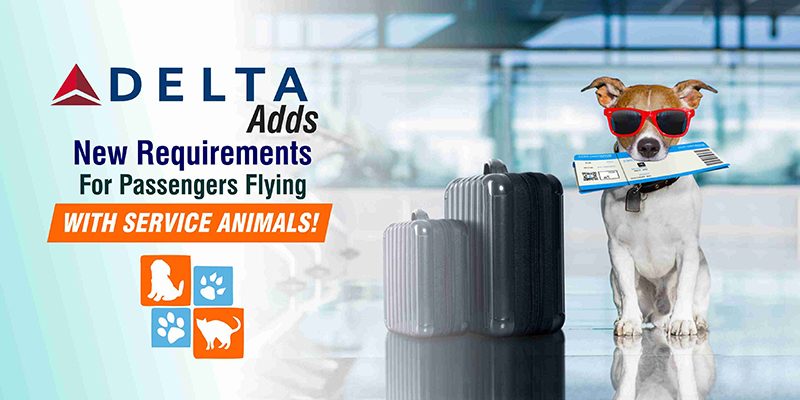 The US major airline; Delta Air Lines has recently declared new requirements for the travelers flying with a service animal or emotional support animal.

This addition is done in responding to the increasing incidents of animal bites, barking, and defecation.

So, all the passengers who want to fly with an animal in the cabin have to follow some extra rules. This will start from March 1 respectively. The flyers with the service animal with them need to give a proof of the animal’s “health or vaccinations” 48 hours in advance of the flight.

In addition to that, a document signed by the passenger confirming that the animal can behave in the cabin of a plane is also required.

For passengers who are flying with psychiatric service or emotional support animals also need to bring a letter signed by a doctor or a licensed mental health professional attesting that the passenger needs to fly with the animal.

The airline also wanted that the animals brought onto a plane must be fit on or under the seat with the passenger and cannot obstruct the aisle.

The U.S. Department of Transportation has given airlines the authority to adopt tougher restrictions on allowing passengers to fly with emotional support animals.

The reason given by the airline for such addition is the 84% of the increase in the animal incidents since 2016. These incidents include stuff like urinating, defecating, biting, barking and lunging on planes.

Talking about the figures, the airline mentioned that it carries about 700 support animals a day which become nearly 250,000 on annual basis. The airline also mentioned they consider dogs and cats as the emotional support animals but passengers have tried to bring turkeys, possums, snakes, spiders and other creatures on board.

In support of Delta’s actions, the Assn. of Flight Attendants issued a statement.