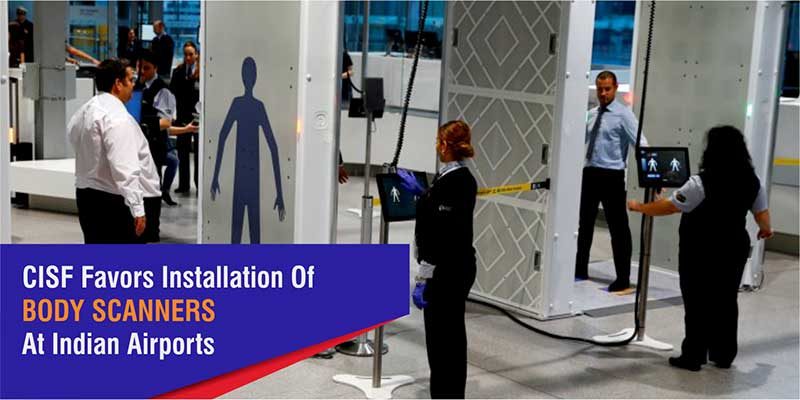 To ensure enhanced security for air travelers, CISF has favored installation of body scanners at all airports (both domestic as well as foreign).

The Central Industrial Security Force is focusing on introducing the tagless hand baggage regime of travel for the passengers. This thing will be applicable at all the airports.

Hemendra Singh (CISF spokesperson Assistant Inspector General) stated that “CISF is of the view that installation of body scanners will definitely improve the efficiency of screeners as it identifies the spot which needs be physically checked.”

At the Indira Gandhi International (IGI) airport, the paramilitary force had in October conducted trials of one such device.

Currently, this system is used in many countries. This entails frisking of an individual with the help of x-rays and similar technology.

As per the latest data of CISF, a total of 96 cases were reported in the past 1 year where the passengers (both Indians and foreigners) were apprehended by it for using fake/edited tickets to enter into airport terminals across the country. And maximum of these cases took place at the IGI airport this year.

In addition to that, a total of 232 cases of arms and ammunition have been detected where the passengers were carrying prohibited items at the terminal area. Talking about IGI, 29 such cases were detected there.

Talking about the lost or unattended gadgets; cash and other passenger belongings worth Rs 44.66 Crore was also consumed in 2017.

Whenever there is any complaint regarding the loss of property/article come over (either through e-mail or hard copy), these cases are enquired thoroughly with the help of CCTV recordings.

Hemendra Singh added that the force has also formed the ‘help desk counters’ at all the 59 airports. These are established to facilitate senior citizens and women.