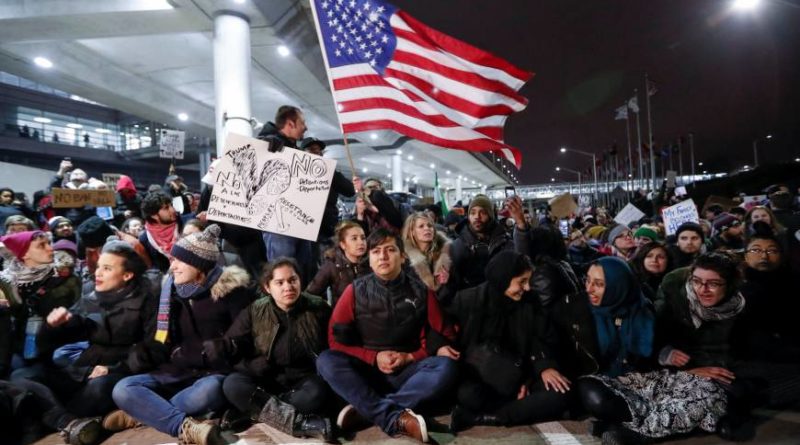 News
February 7, 2017July 26, 2017
The fate of President Donald Trump’s decision to temporary ban people from Seven Countries which are Muslim majority countries will be decided by the courts. As many people have made appeals against this controversial act in the appeals courts and now the U.S. justice Department will face off with these appeals.
Last week James Robart the U.S. District Judge has suspended the Donald Trump’s ban decision, which has affected the people of seven countries from entering the country.
Now appeals court will hear the arguments and then a decision will be taken on its fate whether the ban should be restored or not. The lawyers of Justice Department and opposing attorneys will argue over this.
Yesterday on Monday Donald Trump tweeted, “The threat from radical Islamic terrorism is very real, just look at what is happening in Europe and the Middle-East. Courts must act fast!”
Trump defended his ban decision by calling James Robart a “so called judge” who was appointed by Republican President George W. Bush. He also said that this step was taken to protect the country from any terrorist threat.
The state of Washington has said that this ban is illegal and has caused harm due to which some students and faculty had been stranded overseas.
Donald Trump’s executive order in which he has put restrictions on people from seven Muslim countries had sparked protests in the US and overseas.
The think tank of New America said that all the people who carried out any attack inspired by Islamist Militancy were US citizens or legal residents. There was not a single person who came to the United States to carry out the attack and none of them were the member of any family which migrated from these countries which are on the ban list.
It is a tough battle for Donald Trump as two members of the three-judge panel are appointed by former Democratic Presidents Jimmy Carter and Barack Obama, and one was appointed by Bush. This panel will hear the arguments over the ban issue.
However, there are more opponents of the ban than its supporters.
Usually, appeals courts are considered to upending the status quo. This time it’s regarding a lower court’s suspension order.
Now it will be tough for appeals court as well whether to restore the ban or not? Whether the state has enough ground to put the lower court’s order on hold. Only time can tell the fate of this ban.