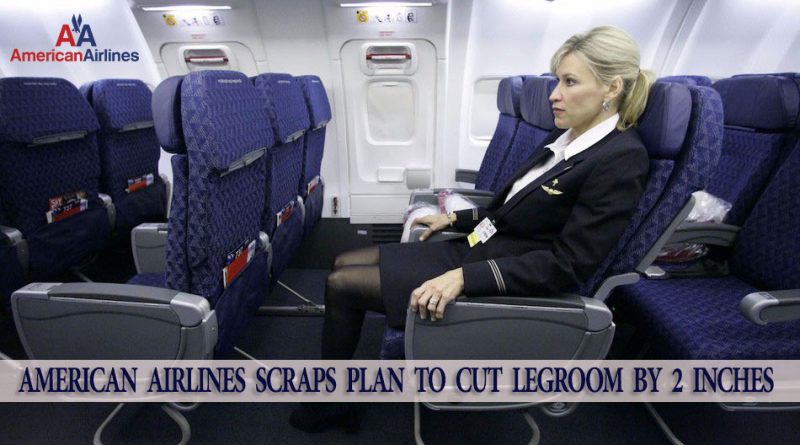 After a lot of complaints from the passengers as well as employees, finally, the American Airlines has scrapped its plans to cut down the extra leg space between the economy seats by 2 inches.

On Tuesday, the airline officials have announced through a letter to their employees that they have no plan to squeeze some rows of seats on its new Boeing 737 MAX airplanes and some of its new planes too.

Originally, as per the plans of the American Airlines, they want to reduce the seat pitch or space between the same spot on two seats. But after a lot of feedback from both customers and team members, the largest carrier of US announced to change the plans on Tuesday.

At the time, the airline is claiming new seat technology on the 737 MAX planes which were designed to increase the personal living space. There can be seen comparisons between the American Airlines’ new 29 inches legroom space with the 28 inches leg space of carriers like Frontier and Spirit which let the potential flyers and the airline observer to think how worse can things may be.

In the letter from the American Airlines, the airlines stated that “It is clear that today, airline customers feel increasingly frustrated by their experiences and less valued when they fly,” It added, “We can be leaders in helping to turn around that perception, and that includes reviewing decisions that have significant impact on the flying experience.”

Anyhow, the airline is still following the plan of fitting 172 passengers on its new 737 MAX planes as per the USA Today notes. Now the plan is to ditch the more spacious “Main Cabin Extra” which involves 36 to 37 inches of leg space. By doing so, it becomes easy to have a minimum of 30 inches of pitch for all main cabin rows on the 737 MAX planes.

American Airlines’ this new announcement comes as a surprise for everyone especially in the era in which every single airline is focusing on shrinking the seat space to squeeze more passengers to increase their net greater profits. May be it is taking interest in the frequently asked questions and the passengers’ reviews on the American airlines.

Last year, the downsizing of seat size appeared so dire that the representative Steve Cohen introduced a bill in order to establish federal minimum seat sizes. But after that, no such law has been passed and we see a constant reduction in the size of seats.