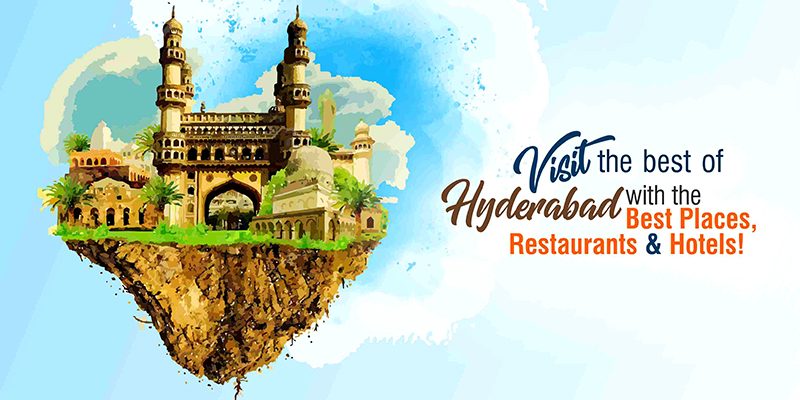 It is very hard not to agree when Hyderabad is often called as the New York of India. It might be the racing lifestyle or the young crowd, modern-day culture or old traditions, local population or the historical attractions. The places to visit in Hyderabad will take you through the length and breadth of the city, even beyond the city’s much hyped biryani.

And without a doubt, travelers can have a time of their lives visiting these 5 famous places in Hyderabad.

Charminar is one of the most reckoned structures of all the historical places in India which traced its origin back to the late 1500s. It serves as an iconic landmark to look forward to it as it’s one of best places to visit in Hyderabad for all travelers alike. The glorious Charminar city which was originally built as a mosque, stands as an epitome of art and architecture in the heart of the city. Near Charminar, it is a must for the food lovers to relish some of the best Hyderabad street food.

The Archaeological Survey of India considers the Golkonda Fort as an archaeological gem which is a treasure in the chest of Hyderabad. A former capital of the Qutb Shahi Dynasty, this place is an architectural masterpiece of all times. It is a strict no to miss out on this fort of all the Hyderabad attractions.

Mecca or Makkah Masjid happens to be one of the oldest places to see in Hyderabad which is a religious site by nature. The Masjid got its name after the bricks that were brought for construction from the famous city of Mecca in Saudi Arabia and got listed as one of the top heritage sites in India. This fascinating Masjid is not only the most spectacular places to visit in Hyderabad standing tall at a height of 23 meters,  but also one of the largest mosques in India.

Well Ramoji Film City sure does live upto that expression big surprises come in small packages. It holds a Guinness World Book Record for being a home to more than 50 well-equipped film sets at a single location and  one of the famous tourist places in Hyderabad.

Best Places to eat in Hyderabad:

The dining experience in Hyderabad’s Barbeque Nation is fun and engaging. With a pre-fixed menu the dinner here starts with five barbecued starters, which are the real draw of all the Barbeque Nation outlets. Every table is equipped with a grill that is used by guests to keep their starters warm or glaze with the accompanying marinades and sauces. All tables also have a little flag which is an indication for the alert service to keep the starters coming until the flag is up.

Paradise is a food empire not limited to Hyderabad specializing in Hyderabadi, Chinese and Indian delicacies with six outlets throughout the city. The range of the branches is from large spaces in pre-established compounds to big venues which comprises of several different eateries under the same roof. It is quite the progress for a little cafe that first opened in 1953 to serve few snacks with tea.

If you’re desperately craving a delicious, well-cooked biryani, and is too far from a Paradise branch, look for a Bawarchi restaurant instead. It is another Hyderabad chain of restaurants that locals cherish. Several variants of biryani including a vegetarian option, are up for grabs in the most popular recipe the basmati rice is seasoned with marinated little pieces mutton meat.

Chutneys are available in an incredible number of variants in India and the entire South Asia which consist of a dip obtained from a combination of fruits spices and vegetables. These traditional delights give the name to Hyderabad’s Chutneys which is a famed local set of restaurants serving scrumptious and traditional South Indian food, which also includes signature selection of six different type of chutneys.

As compared to the country’s northern regions, Hyderabad’s regional cuisine features a stronger emphasis on fish and seafood. Hyderabad’s restaurant Dakshin is a part of the city’s ITC Hotel which specializes in South Indian specialties and also reflects the prominence of sea-inspired dishes through a variety of fish-based treats but the house’s menu includes many other delectable delicacies of the South, including Kerala stew.

Gleaming with Venetian chandeliers, marble staircases and stunning collections of crystal, the palace is known as Taj Falaknuma. It is now leased to the Taj Group and enjoys a privileged location at 2000 feet above Hyderabad but formerly the palace was of the Nizam of Hyderabad. From Historical Suites which are styled in an Edwardian look to the Grand Royal Suites, there’s a large collection of rooms available which have panoramic views of the city.

A guest house built by the last Nizam of Hyderabad in 1917, and magnificent resort overlooks the lovely Osman Sagar Lake which is housed in the Sagar Mahal. Each with unique amenities there’s a large variety of villas you can book. For the ultimate experience in luxury service, some have private lawns, and the Pool Villa gives you access to a private swimming pool as well as a butler.

Lemon Tree Hotel is strategically located adjacent to the Bombay Stock Exchange set in the heart of the financial district of Gachibowli, and in close proximity to prominent software companies in the area. The traffic is considerably quieter and there’s a lot more greenery due to the distance from the city.

Vivanta by Taj is sure to satisfy all your needs for a comfortable stay with indulgent, stylish chambers. rooms include surround sound home theatre systems which are large and well-equipped. With Italian, Mediterranean, Cajun and Indian cuisines, their restaurants will be among the highlights of your stay and there’s sure to be something to satisfy even the most discerning of taste buds.

The Taj Deccan offers a calm and relaxing stay at its location of the upscale Banjara Hills with a lush six acres of land for their elite hotel. Including three kinds of rooms Superior, Residency Rooms which includes breakfast which is complimentary, cocktail hours and the lounge and the Suites which have a bedroom and a sitting room, the hotel’s facilities include a florist and a beauty parlour.