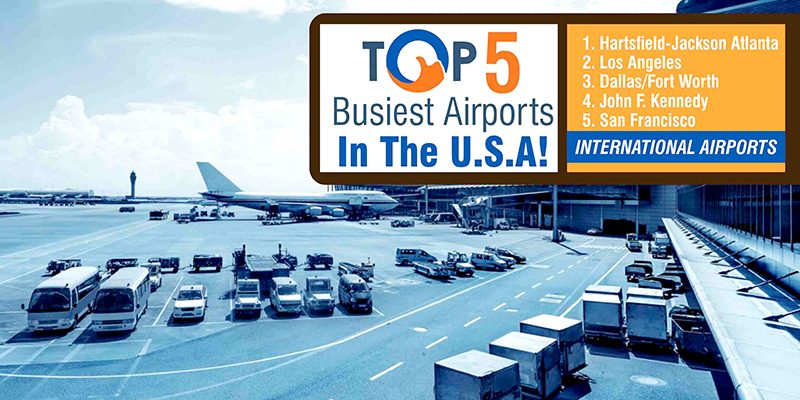 Some of the most popular tourist destinations of the world are in the United States. From this fact it is understood the reason that the country’s airports are some of the globe’s busiest. We have ranked the USA’s busiest airports in this quick guide. We have reviewed various types of data in the below analysis to determine the most popular U.S. airports. By analyzing how many passengers are traveling through the airports, below is the list of the busiest airports in the U.S.A.

Atlanta Airport is the busiest passenger airport in the world after that Beijing comes in second. According to a traffic report by Airports Council International, it is serving more than 100 million passengers a year. It is the primary airport for visitors to the Southeast U.S and services the bustling Southern city of Atlanta. Also, it’s only a two-hour flight from 80 percent of the US population. Many southern regional airlines are operating out of Hartsfield-Jackson. Delta Airlines has its hub here. The airport has 151 domestic and 28 international gates.

To help handle the influx of visitors from Asia and the Pacific, Los Angeles International is undergoing renovations. Visit their site to check out the latest tips for navigating the airport, latest updates, and much more. LAX is handling many connections to Hawaii and destinations on the West Coast besides just being the main airport for travelers to Los Angeles, Southern California and Hollywood.

In the state of Texas, Dallas/Fort Worth International Airport is the busiest airport. The airport has its own postal code and post office because of the airport’s size. This airport has also been named as one of the nation’s most tech-friendly airports. DFW is the hub for American Airlines.

JFK, which is the main international airport for New York City, sees arrivals and departures from almost every international airline in the world. The nearby LaGuardia Airport is NYC’s main domestic airport, while a number of domestic flights are handled at JFK. Delta Airlines and American Airlines have a significantly large number of connections through this airport, as does the low-cost and popular airline JetBlue Airways.

San Francisco International Airport is the second largest airport in California with three domestic terminals and one international terminal serving as a hub for West Coast travelers to and from Asia and Europe. Virgin America has its base of operations at SFO and United also has a large hub here. It has been awarded for its efforts to reduce waste, green design, water use, and greenhouse gases.