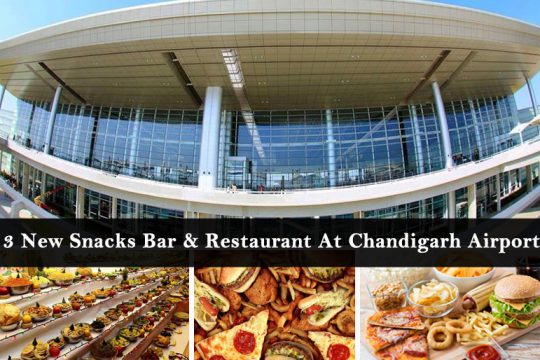 YES, you read it right! You can enjoy the services of 3 additional snack bars along with a restaurant at the Chandigarh International Airport by this month before Diwali.

These new eateries are introduced as a result of the tender awarded to a company to set up 14 food and beverage (F&B) outlets at the airport – As per the Chandigarh International Airport Limited (CHIAL).

According to the statement of Sunil Dutt (CHIAL Chief Executive Officer) to Chandigarh Newsline, “These new facilities will come up before Diwali. In total, four more food joints will be opened now.” He added that there are many more outlets would come up at the airport. The new food outlets will come up in different parts of the airport.

In the year 2015, the new terminal of the international airport was inaugurated. Since then, passengers have witnessed a number of facilities at the airport, introducing one after the other. In order to provide numerous facilities to multiple passengers, CHIAL has also drawn flak from the Punjab and Haryana High Court.

The new terminal of the Chandigarh airport (Mohali) was inaugurated by Narendra Modi, the former Prime Minister of India. However, the first flight takes place a year later. To set up two duty-free outlets at the airport, the officials had also called fresh tenders. But, they failed to get a good response from firms after extending the date of tender many a time.

In the session 2016-17, the Chandigarh airport has recorded a growth of 20 percent passenger traffic according to the reports of Airports Authority of India.

CHIAL will release the new schedule which would remain in place from 3rd October to 28th. As per the new schedule, the first flight arrives at 7.10 am while the last flight would take off at around 3.45 pm.