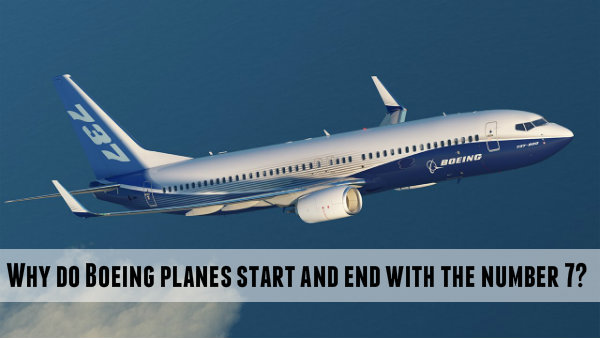 Ever wondered why all Boeing aircrafts are named with a 7. There is the Boeing 747, the much smaller 737, the new Dreamliner 787, and not forgetting the 757, 767 and 777. If you are a frequent flyer or if you hold the curiosity for the unusual, you might have thought of reasons behind this. As it turns out, this is in fact the most asked question to Boeing. And yes, there is a definite reason to this “madness”.

It has nothing to do with 7 being a lucky number for Boeing, however. And no, it has no links to the angle of the aircraft’s wing which forms a 7.

The truth is more to do with the greatest marketing advice of all time. There was a time when Boeing aircrafts did not start and end with the number 7. In the earlier Boeing days, the planes were named Model 40, Model 80, and Model 247 and so on. These were not as catchy as the later names. So how did the tradition of naming them with a 7 start.

Well, the story goes that, after World War II, the company was reorganized and each department was given a 3 digit number to identify with. This is where things get interesting. Michael Lombard, the Boeing historian says that as per the new restructuring strategy, the Boeing engineering departments divided the model numbers into blocks of 100 for each new product areas. So there were the 300s and 400s which represented the aircraft, 500s were used for turbine engines, 600s for rockets and missiles and the number 700 was kept for jet transport aircraft.

However, saying Model 700 was not easy on the tongue, so it was suggested by the Boeing Marketing team to name as 707 instead. And as a result the pattern started with 727, 737 and it continues and moves forward today with the Boeing Dream liner 787 models.

So there you have it, the curious case of all Boeing aircrafts starting and ending with a 7!