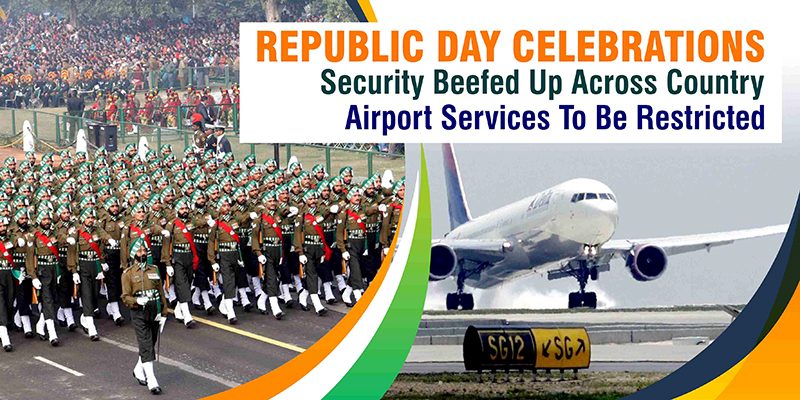 The celebrations of 69th Republic Day is going on across the country. On the other side, the central and state agencies have swung into action to beef up security.

The leaders of 10 ASEAN countries will be attending the Republic Day parade as chief guests in New Delhi. This includes the countries Indonesia, Malaysia, Singapore, Myanmar, Cambodia, Thailand, Vietnam, the Philippines, Laos, and Brunei. It is for the very first time something like this has organized.

The security agencies have increased vigilance at various sensitive spots across the country too.

As per the report on NDTV, anti-sabotage checks are on, especially after security agencies were alerted to a possible use of a China-made improvised explosive device by Pakistan-based terrorist group Jaish-e-Mohammad.

In addition to that, from 18th to 26th January; no take-offs or landings would be allowed at Indira Gandhi International airport between 10.15 am and 12.35 pm.

On the same, BK Singh (additional commissioner of police, New Delhi) has stated that “Threat perception is high, that’s why we have taken all precautions. Rooftops along the route of the parade have been sanitized and commandos stationed.”

At sensitive locations such as Rajpath, Vijay Chowk, and Rashtrapati Bhavan, the use of airborne cameras and drones should be totally restricted.

According to the reports of The Times of India, Delhi Metro Rail Corporation (DMRC) announced that the services will be restricted as per instructions from Delhi Police.

Talking about the airports, there is also a high alert in the run-up to Republic Day celebrations. Moreover, the Bureau for Civil Aviation Security (BCAS) directed the Central Industrial Security Service (CISF) to check out all the explosives that could be hidden in perfume bottles, or anywhere else.

As a result, the CISF will monitor flights from airports and airfields in and around New Delhi. Plus, it will also check vehicles for the possibility of bomb threats. CISF personnel is also directed to frisk passengers before they board the aircraft and monitor catering services vehicles.

One of the CISF officials has stated to Hindustan Times that they are directed to even sanitize the catering van before boarding.

IAF; Indian Air Force has also imposed flying restrictions from 19th to 26th January. Plus, the airspace activities will remain closed between 10.35 am and 12.15 pm. This is done with a view of the air fly-past at Republic Day parade rehearsals in New Delhi.

Pune Airport Authority has also restricted visitor entry inside the terminal building between 20 to 30 January in the sake of security threat.