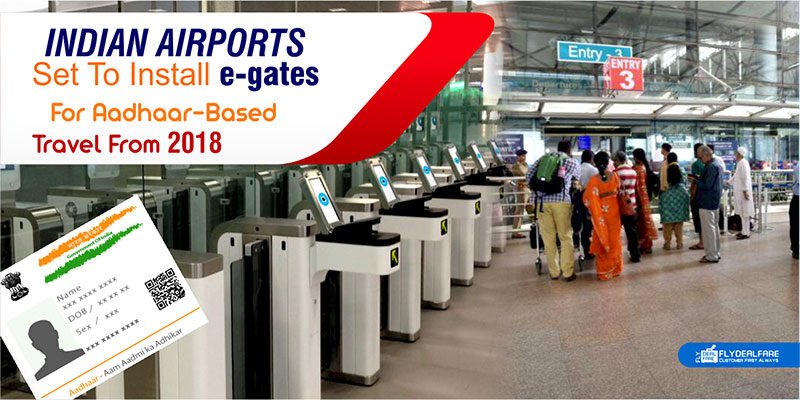 As per the statement of a top government official, the civil aviation ministry has chosen Aadhaar as the digital identity, needed for paperless airport entry. It is expected that most of the major Indian airports are expected to install e-gates to allow Aaadhar-based travel from next year.

Currently, the passengers need to show a printed or mobile air tickets for the entry purpose at the airport.

The airport entry would be based on biometrics under this new system.

The aviation ministry is expected to complete the process of creating a template document for instituting an Aadhaar-based system at airports by the end of January 2018. It will be approved by security agencies, civil aviation secretary Rajiv Nayan Choubey.

To make this new addition a success, the airports in India will be allowed to adopt biometric readers and other technology, vendors.

A database that talks freely among the stakeholders—airports, airlines and Aadhaar authorities has already been added.

Majority of the airport in India have shown interest in moving to the new system. This includes airports at Delhi, Mumbai, Hyderabad, Bengaluru, and Cochin plus the state-owned Airports Authority of India. This system will not only save costs but also improve their security architecture.

One of the other reasons of adding this system is that the airports at Delhi, Mumbai, Goa, Chennai, Hyderabad, and Lucknow are facing a huge growth in the number of passengers i.e. about 115-20 million in 2017.

According to studies conducted at Bengaluru airport, it is found that within the same time period, more people are able to pass through e-gates at Indian airports as compared to gates that have manual checking. This will result in increased capacity and reduced congestion as well.

HOW WILL THIS WHOLE SYSTEM WORK?

With this new Aadhaar-based process, passengers can pass the verification process just within 5 seconds at every checkpoint right up to the boarding gate. Plus they can complete the screening process in 10 minutes which is quite less than the present time i.e. 25 minutes.