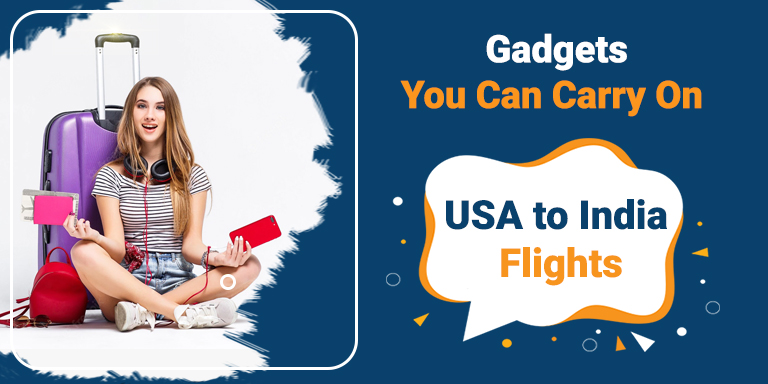 Considering what to pack for a trip from the United States with cheap flights to India? Even if you don’t have to pay duty, you should think twice before shipping goods or gadgets to India. Even a five-year-old is familiar with terminology like “smartphone,” “laptop,” “tv,” “bluetooth speaker,” and “headphone.” Our lives have grown more dependent on technology. A typical guy would lose his everyday efficacy and efficiency if all of the devices he relies on were removed from his daily routine.

In our daily lives, we use a variety of technological gadgets. Everything from preparing food to listening to music makes use of gadgets or electrical equipment in some manner. Other than in transmission and communication, one of the most important uses of electronic devices in our life is as a tool for information dissemination. Think about how and when you use your electronics in the morning. The alarm clock is the first device you use to ensure that you arrive on time every day. As a result, electronics have become an integral part of our daily lives.

Traveling from the United States to India, Gadgets Rule the Roost

With gadgets, the world is your oyster. Traveling with electrical equipment or gadgets necessitates many security check-ins and, in certain cases, hefty excise duties in India. Adults in the United States spend over three to four hours a day on their smartphones, according to a 2017 poll (s). Social media has made it almost difficult for us to go lengthy periods of time without using our smartphones or other electronic gadgets. Mobile devices, such as smartphones and laptops, are only the beginning. Today, a man cannot execute even the most fundamental tasks without the aid of technology.

Many individuals are glued to their computers and cellphones at airports. But aren’t airports strict? It is against the law to bring or use any electronic devices inside an airport without prior permission from the airport authorities. Passengers and airport employees both benefit from these laws and regulations, which were put in place for their own protection.

Customs taxes on electronic goods cannot be avoided. It is mandatory for any imported electronic devices from the United States to be disclosed to Indian customs, and the products will be subject to a customs tax.

Customs standards and regulations for travellers from USA to India are listed below:

Devices including as smartphones, laptops, and tablets may be used in the airport infrastructure and enclosed air bridges. To encourage passengers to make full use of their electronic devices, most airports include charging stations and WiFi. Certain (and occasionally all) electronic equipment, such as smart phones, laptop computers, and cameras, are prohibited in customs and migration proceedings within the authority of security and customs authorities. In most cases, computers must be removed and placed separately for security inspections.

Most of us have flown before and are aware with the fundamental laws and regulations that must be observed by passengers. Passengers are well aware that they must turn off their cellphones and other wireless devices, such as mobile networks, Bluetooth, or Wi-Fi, before boarding a plane. Airplane mode is required if the passengers aren’t allowed to use their cellphones. Even in aeroplane mode, passengers cannot use their phones during takeoff or landing.

During flights from USA to India, you are permitted to use light electronic devices, such as mobile phones and iPods as well as electronic books and headsets. However, these devices should be in flight mode, since cell and Wi-Fi transmissions might impede air traffic controllers’ ability to receive signals. Passengers’ lives and the lives of other passengers might be jeopardised while using technological devices.

As a general rule, most travellers feel worried and believe that passing customs in India is a tough and time-consuming undertaking. Passengers are often subjected to official harassment and disruptions as a result of their actions. However, there’s no need for this at all! Passengers needn’t worry about the security and customs check since it’s merely a routine operation.

For the most part, in the event that you are taking sealed packs containing cell phones or laptops, the officers at the check-in counter may presume that you are taking them away for the purposes of selling. In addition, you may be subject to customs charges and other costs. Whatever the case may be, try to remain calm and collected. Each of these gadgets should be taken out of its packaging and stored in a separate suitcase or piece of baggage. The same applies if you’re hauling around several laptops. A carry-on and a cabin bag are both acceptable options. As long as you don’t look worried, the cops won’t suspect anything if you place one of your phones on the tray and the other in your purse. Check to make sure that the X-ray machine doesn’t pick up the security tray along with your luggage.

How Many Devices Can Be Brought Into India?

The amount of electronic gadgets that may be imported into India from USA is generally unrestricted. Any other considerations are superfluous; you must be a legitimate traveller and pay tariffs or charges on the things you want to remove.

In most circumstances, you can carry two computers or cell phones without difficulty. However, if you decide to bring more than two, you will be responsible for paying the appropriate tariffs and charges. It is possible to avoid these requirements if you can demonstrate that the additional gadget is not brand new and has been in use for some time (often by providing the purchase receipt). This ban is in place because many travellers bring electrical items back home as gifts for family members, friends, or relatives. The government wanted to get rid of this tendency since it had a negative impact on the country’s economy and income. When it comes to export and import, every nation on the globe has at least one set of comparison standards or laws that assure a steady flow of money from this sector. Because of this, India and the United States are not to be condemned for having these norms.

If you’re travelling from USA to India, don’t be afraid to carry your electronic devices with you. We’re certain that now that you know the basics of flying from the United States to India, you won’t have any problems with your trip or any electronics you plan to bring back with you. Have a great day exploring new places!