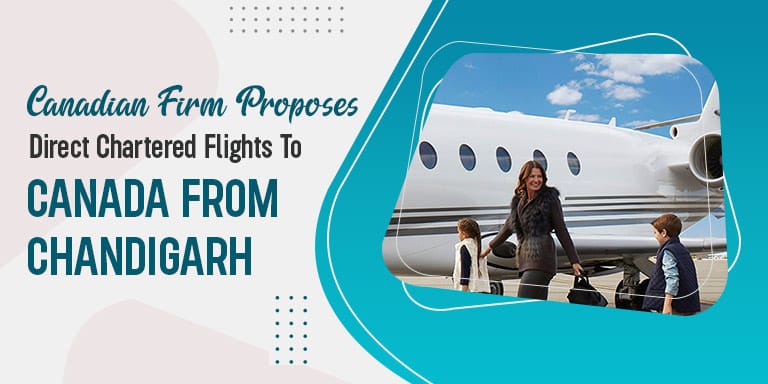 The Canada based company Dogwerx International Capital Corporation approached the Chandigarh International Airport and proposed to start charter flights for two destinations in Canada. The officials too have given their nod for the proposal put forward by the firm. After the final deliberations are made, it will prove to be a big relief for all the Punjabi Diaspora in Canada. That’s because it will make Canada to Chandigarh travel a lot more feasible and convenient for them.

Rakesh Ranjan Sahay, the Chief executive Officer (CEO) of Chandigarh International Airport has said, “The Canada based company has approached us for starting charter flights for the two cities of Canada. We have given them a go-ahead and are now waiting for the final nod. Once the plan takes off, it will come as a huge relief to the Punjabi Diaspora in Canada.” He further said, initially it’s going to be a seasonal flight for the first three months on a 200 seater aircraft, but after accessing the response, the frequency and the capacity of the flight may surely be enhanced.

He also talked vis-a-vis Flights to London and said the authorities had convened a meeting with the British High Commission and have talked about the possibility of flights to Birmingham or Heathrow airport. Albeit, there are flights to India from these destinations but there are no flights to Chandigarh as of now. Kiron Kher, Member of Parliament, from Chandigarh, has been bearing down upon the proposal to start International flights to both Canada and the United Kingdom.

It’s been six years since the Prime Minister of India has inaugurated the International airport in Chandigarh on 11th of September 2015, but the airport only has two international flights – to Dubai and Sharjah. These too have been stalled quite a few times during the global pandemic of Covid-19. Flights to Dubai are operated seven times a week while the Sharjah flights are operating twice in a week. Canada to India flights see a lot of passenger traffic and most of the people that travel are predominantly from Punjab.

Sanjeev Vashisht, a member of Chandigarh International Airport Advisory Committee, has said, “We have been trying for more international flights, even though a case is pending in the Punjab and Haryana high court regarding this. The international airport was built for the promotion of trade, which is possible only through connectivity to multiple parts of the world, along with a wide domestic network,” he said.

In November 2021, an air cargo facility was launched from the airport, but these operations too are yet to take off as they are awaiting approvals from the Airport Authority of India.