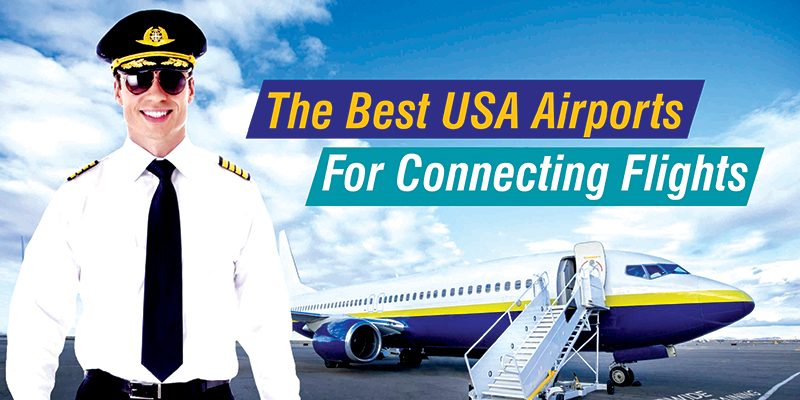 The worst nightmare of every traveler is to not to miss connecting flight, and having to scramble to re-work travel plans.

Missing a connecting flight is one of the most frustrating and stressful things that can happen to you at the airport. You need to give yourself ample time between flights if you want to avoid it, doing little homework before you fly.

The best USA airports to connect through are:

Despite its snowy winters which are way too long often begin well before Thanksgiving, according to our research Minneapolis-St. Paul is a very good choice for connecting flights. Flights leaving from MSP were canceled less than 1% of the time over the past three holiday seasons.  This is probably due to the fact they are very much aware that bad weather is expected in Minnesota so they’ll when it arrives, and they are prepared.

This airport has always been a top choice for travelers going to Hawaii or Asia, and that too for good reason. SEA had the lowest cancellation rate of any major airport in the U.S. over the past three years, with less than half a percent of flights leaving Seattle being canceled. Not only passengers landing in Sea-Tac often get to enjoy a close-up, but the flights arriving in Seattle significantly delayed less than 5% of the time, with a breathtaking view of Mount Rainier.

If you’re traveling to South America, the southwest is a logical choice for a Airport connection, and Phoenix Sky Harbor is the most reliable connecting airport. Not only did the airport have the 10th lowest cancellation rate, it also has the third lowest delay rate for arriving airplanes. The travelers who are making a connection of 45 minutes or fewer over the past three holiday seasons would have missed their second flight about 5% of the time, which is far below the average for major U.S. airports.

Charlotte was the number two best airport of any in our study for making your connection with a cancellation rate of less than 1%, and the top airport in the southeast. It has managed that growth well by adding runways, though it has seen traffic increase in recent years, first in 2010, with another planned in the near future. The airport has also been expanding its concourses. Charlotte is a good choice if you are making a connection in the southeast.

To airports in the Northeast, the high volumes of air traffic and unpredictable weather is common and had made them generally poorer choices for connecting flights. Pittsburgh though has performed relatively well during the holiday season. Better than any other airport in the northeast, its missed connection odds of 6.75% were below the average for major U.S. airports.