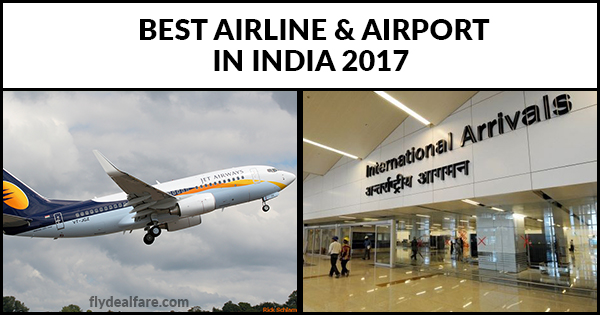 Being one of the world’s largest airline sites, Skytrax conducts its independent passenger choice awards every year. More than 10 million people participate in this and fill different questionnaires in regards to the best airports and airlines in the world on the basis of their opinions. Multiple kinds of stuff are evaluated when it comes to finding out the best airline or airport of a specific country or the world.

For airlines, mainly things like front-line product and service are considered and for airports, traveler experiences are evaluated which includes the check-in, arrivals, transfer through to departure at the gate and more.

Skytrax has also studied the perspective of numerous passengers regarding the air travel in India and find out the following award winners, including the airlines and the best airport in India 2017.

Skytrax concluded the Indigo Airlines as the ‘Most Cost-Effective Airline’ of India. The airline has also been ranked as the second best airline in Central Asia. It has been consistently picked up as the low-cost airline and grown a lot so far. Along with its cheap fares, the airline also counted as one of the punctual carriers and attain good ratio regarding customer service and baggage handling services. The airline offers excellent services to around 40 domestic destinations plus the seven international routes.

Skytrax has chosen Jet Airways as the best carrier to offer optimum full service in India. Initially, the title was given to Kingfisher Airlines but after its demise, it is Jet Airways to hold the title. Being ranked as the fourth best airline in Central Asia this year (conclude 5th place in 2016), Jet Airways scores better than airlines like Vistara and Air India which are ranked seventh and eighth this year. The carrier has won a number of awards for its quality services from the year, it originates in 1993. Gaining specialty in-flight services like food, punctuality, and baggage handling, it is the second largest airline in India. Holding 15% share of the market, the carrier supports its services to more than 45 destinations in India and around 20 international routes. It has its primary base in Mumbai and Delhi, Bangalore, Chennai, and Kolkata are its secondary base.

After the construction of Terminal 3 in the year 2010, there can be seen a huge change over in the functionality of international and domestic flights. By handling more than 55 million of passengers annually, it is also the busiest airport in India 2017. The airport provides convenient access to different terminals and supports Delhi Metro Airport Express train station too.

On one hand, the Delhi and Mumbai Airports fight for the title of Best Airport of India, Hyderabad, and Bangalore compete for the title of ‘Best Regional Airport’. This year i.e. 2017, the tag of the best regional airport in India is gone to the Bangalore Airport (last year, it was the Hyderabad Airport). Bangalore Airport is the 3rd busiest airport in India and supports more than 20 million passengers annually. Being initiates its functions in the year 2008; the airport was constructed by a private company. At the airport, both the domestic as well as international terminals are in the same building and share the same check-in hall. The airport is ranked the third best airport in Central Asia and defeated the Hyderabad airport which occupies the fourth spot.

After Delhi Airport being chosen as the best Airport, Mumbai Airport holds the 2nd spot in the list of best airports in Central Asia. But when it comes to best staff, people pick the Mumbai Airport as the best. The airport handles more than 45 million passengers a year. After being held by a private operator, the airport has undergone various renovation and upgrades. The airport’s new integrated international Terminal 2 supports all the functions of international flights and domestic airlines are currently in the process of relocating to T2 in a phased manner.