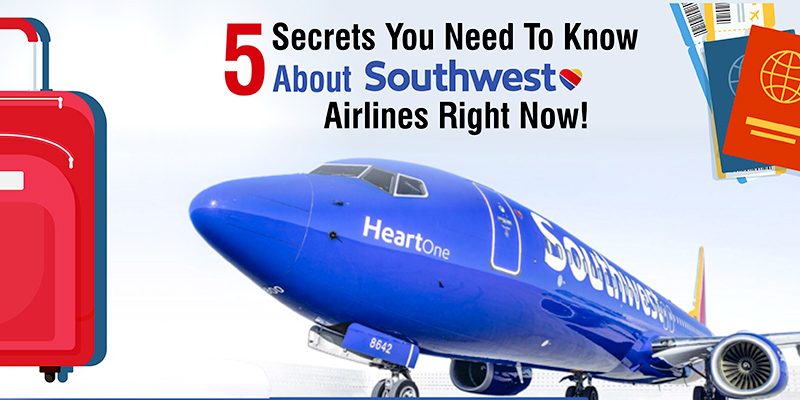 Southwest Airlines is commonly referred to as a discount airline, despite being one of the most profitable and largest in the country. There is no secret about the travelers have a love-hate relationship with the airline.

When it comes to flying Southwest Airlines, the aviation industry as a whole is anything but perfect but there are a few insider secrets you should know if you want to safeguard a pleasant flight.

You’ll definitely need a boarding tutorial as the process is unlike anything you’ve ever seen before if you’re new to Southwest Airlines. Southwest never assign seats, but they will divide passengers into five groups at check-in. The group is called one by one and customers proceed to the plane and call dibs on the best seat available at that time.

The chances of perks like carrying on two bags and extra legroom become zero if your flight gets delayed or canceled. The data suggests that customers should always plan for these types of problems if they opt to fly with Southwest. Southwest in 10th place according to the OAG Punctuality League 2018 results, when it comes to punctuality.

The airline does have a refund policy for these happenings. The time lost in travel that hurts the most as most passengers would agree it is not the compensation they’re most worried about.

Passengers score a free drink on holidays according to Southwest’s onboard drink menu. It just doesn’t mean an extra serving of soda or juice. It’s all about the booze on the special occasions like New Year’s Day, Valentine’s Day, St. Patrick’s Day,  June 18th which is Southwest’s birthday, Father’s Day, Independence Day, September 20th which is Southwest Rapid Rewards credit card’s birthday, Halloween and Thanksgiving.

Passengers carry concerns about the safety issues of aircrafts now more than ever with so many recent tragedies and mechanical issues on flights. In comparison to the other major airlines, Southwest Airline’s operating fleet is quite old. The aircraft of the airline have an average age of 11 years, which when comparing newer fleets owned falls on the higher end of the spectrum.

Prior to 1975, Southwest’s only destinations were Dallas, San Antonio, and Houston. Now as one of our 10 major airlines, they are serving over 100 locations across the U.S. The passengers who are looking to get away at a moment’s notice have the best chance of doing so in Chicago. Approximately, 251 departures leave that hub each day which disperse to 63 non-stop cities.