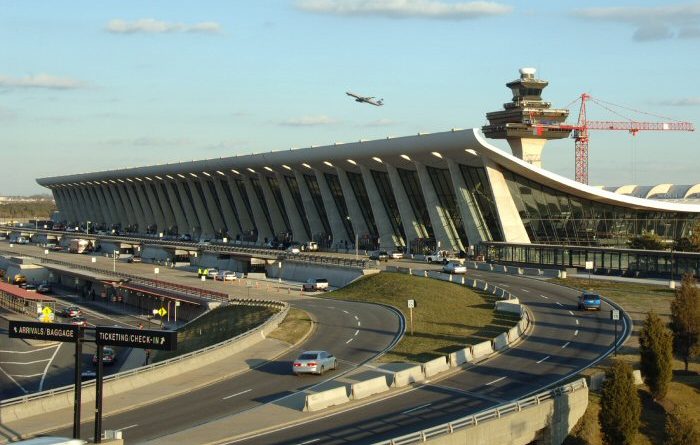 Washington Dulles International Airport is an international airport of United States of America. It is located 26 miles west of downtown Washington, D.C. The airport mainly serves the metropolitan area of Baltimore–Washington.

The airport is named after John Foster Dulles who was the 52nd Secretary of State. The main terminal of the airport is known for its landmark which is being designed by Eero Saarinen. Dulles International Airport is located over 13,000 acres of area.

The main terminal of the Dulles International Airport was extended in 1996 to 1,240 feet which was more than double than its original constructed length which was around 600 feet. In the year 1991, an extension was added to the west of the main terminal for the purpose of international arrival. This new facility extends the airport’s capacity to 2,400 arriving passengers per hour.

Later in September 2009, a central security checkpoint of around 121,700 square feet was added on a new security mezzanine level of the main terminal. The previous ones which were located behind the ticketing areas were replaced by this new checkpoint. Along with that, a separate security checkpoint is also available on the baggage claim level.

Both the security checkpoints are connected to the AeroTrain which links the A, B, and C concourses with the main terminal.

The main terminal also consists two sets of gates that include the first; “H” Gates which are waiting for areas for airlines and the other is a set of four gates with jetbridges that are designated as Concourse Z.

The Concourse A at the airport includes the eastern part of the midfield terminal building. You will find a permanent ground level set of gates which are designed for small planes and regional jets. The Concourse A comprises 47 gates in total. This concourse is currently used for international flights.

On the other side, the Concourse B at the airport comprises a total of 28 gates and is in the western half of the building. The Concourse B is the first of the permanently elevated midfield concourses. Initially, the concourse has 20 gates but later in the year 2003, 4 additional gates were added to it which was followed by a 15-gate expansion in 2008. The Concourse B is used by the international airlines and also by all non-United domestic and Canada flights.

Being constructed in the year 1983, these concourses are designed by Hellmuth, Obata, and Kassabaum. There are 22 gates in total at these two concourses which are numbered from C1 to C28 and D1 to D32. To make it easy for the passengers, the gate with odd-numbered on the north side of the building and the even numbered gates are on the south side. The Concourse C composes the eastern half of the terminal whereas the Concourse D composes the western half of the terminal.

At the Washington Dulles International Airport, you can enjoy a wide range of options for convenient transportation to as well as from the airport. But for those who want to drive their own vehicle to the airport, Dulles Airport offers a variety of parking services and all this at a very nominal price.

There is also the availability of car options which you can avail at the airport. There are a number of companies in concern with the car rentals which you can easily get by contacting the rental company directly to make or change a rental car reservation.

You can find the Washington Flyer Taxicabs which serves at the Washington Dulles International Airport. These services are available exclusively 24-hour to and from the Airport and there is no requirement of reservations in regards to the taxi service. And you can pay in cash or through your credit card. There is also the availability of payment by the Airline Voucher.

Passengers can buy their favorite luxury products online in advance. You can the glimpse of the world’s best buys and best brands and there is also the facility of hand-delivered orders which will be waiting for you at your departure gate.

One of the best facilities to the passengers is the Customers Service.

At Washington Dulles International Airport, we make the first time travelers feel ease and comfort regarding getting in and out from the airport. The airport officials help in issues like parking options, interactive and printable terminal & airport maps, security checkpoint information, information on international travel and traveling with pets and offcourse details regarding the services and amenities offered in the airport.

You can easily Service Animal or Pet Relief Areas at the Washington Dulles International Airport which make it easy for the passengers who are traveling with service animals or pets. You can find the Pet relief areas at the airport at the several locations of the airport like adjacent to Gate A32, next to the Virgin Atlantic Club or across from Gate D1.

Several Lounges are operated by the airlines at the Washington Dulles International Airport. Some of them are:

Passengers can also enjoy free Wi-Fi facility in the airport at the Main Terminal and Concourse areas. All you need to do is to follow these steps:

The facility of Smoking areas is also there at the Dulles Airport as smoking is permitted in designated areas only. In case you caught smoking at the restricted area of the airport, then you will be get fined by a civil penalty of $25.00.

After reading previous bad reviews regarding the Dulles Airport, I was a little worried about traveling through it from LHR to DEN via IAD. Anyway, neither my husband nor I could find any fault with this airport. We did not have to wait at all to go through immigration every official and made our short stay very easy. After our experience, we would not hesitate to transit through IAD again.

While I have experienced difficult long queues at understaffed Dulles immigration counters with unfriendly immigration officers in the past as described in other comments here the last two times I’ve flown into the airport have been quick painless and easy. Immigration officials do seem to have become noticeably more customer-oriented over the last 18 months too. A Supershuttle to Maryland was easy to find and easy to arrange despite a lack of pre-booking – and less than half the cost of a taxi to the same destination. I even like the people movers still used to ferry international passengers to immigration – but I seem to be in the minority there!

I flew into IAD on a UA international flight at 5 pm with a domestic connection next morning. I had a very positive experience. No more waits as the immigration entire process took just about one minute. Baggage arrived a few minutes later and we were out of the airport shortly afterward. I had the same positive experience the next morning too. At 6.30 am, no queues at check-in or at security and flight left on time.