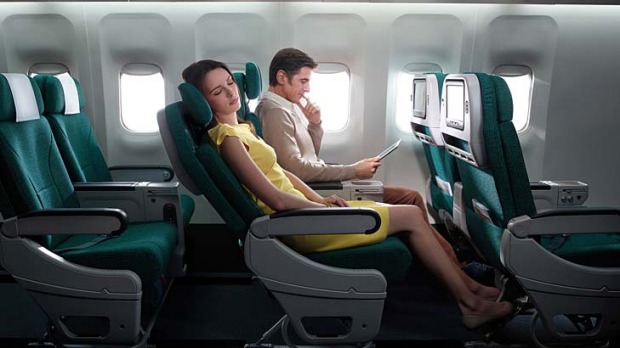 The most thrilling and exciting deal for Travel and leisure are in race offered by American Airline for premium economy on its Boeing 787 Dream liner aircraft in coming year in the month of February. According to USA Today, Airline making it more powerful as the First U.S. Airline is going to provide a one of its international kind of cabins which are equipped with recliner seats and are fully equipped with their premium amenities which are of higher standard than their regular coach.

American Airline is providing services to their passenger’s extra legroom and an additional seat which reclines. These new seats will be definitely better as these seats will have a pitch of 38” per seat and will be noticeably flexible wider. Customers in the premium economy cabin will have the luxury of being comfortable during the duration of their flight, as the new seats will come equipped with an extendable footrest, a leg rest, and adjustable headrests. passengers must have an individual in-flight entertainment system with the wider screen and many more facilities like noise reducing headphones, amenity kits, and beverages.

Fares are known to be available already for sale, though USA Today considered this as informal.

According to the recent statement given by USA Today, some 787s with the premium economy have already begun flying from Dallas to Los Angeles and vice versa, but at present travelers won’t be able to receive the full Premium Economy experience during the journey. That will in position next month when the airline will begin shifting its planes on the international routes.

American Airline hasn’t open pricing strategy for these fares, but passengers can expect fares to fall, it could be fully refundable economy tickets and business class. American has only released the general details about its premium economy seats, and facilities but passengers can imagine more legroom, wider seats, up to date entertainment, and the variety of edible service. On other airlines premium economy usually includes some checked baggage, but it isn’t clear if that will be the case on American.

The exciting Premium economy can be a worthwhile lavish on long-haul flights. It’s expensive as compared to typical economy regular fares, but it is offering more value than business or first class seating, which can demand more money . But if passengers ever adopt it, they must know it does provide considerable comfort and luxurious above standardized coach class, so long as the fare doesn’t break the bank. Hopefully, premium economy catches on and becomes a more widespread (and competitively priced) offering across U.S. Carriers.