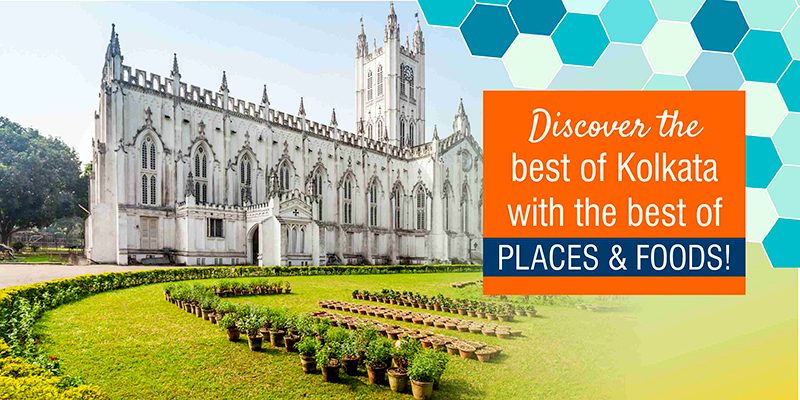 The former British capital of India has illustrious past which reflects through the architecture, fascinating art, and literature of the city. This vibrant city invites you to witness its dazzling culture, artistic grandeur, and legacy of literary through an exhilarating Kolkata sightseeing tour being the cultural and intellectual hub of India. Here are some of the best places to visit in Kolkata which form an essential part of the city’s tourism, apart from its ancient culture and rich history.

Best places to visit in Kolkata:

Victoria memorial is one of the best places to visit in Kolkata which is spread over 57 acres of land, housing 21 lush green gardens, 3,900 artistic paintings and 28,394 artefacts. The white marble beauty is a host to 20 lakhs annual visitors, built in the memory of Queen Victoria.

Fort Williams is a huge building from the colonial era that has served multiple purposes till date which is situated on the eastern banks of Hooghly river. It is a must visit place during your Kolkata sightseeing tour as its one of the few Kolkata points of interest. This place was once a temporary jail where prisoners were hauled and was once known as the ‘black hole of Calcutta’, but now it serves as the headquarters of the Eastern Command.

It is one of the most visited tourist places in Kolkata which is the nineteenth century palatial mansion in North Kolkata. Bragging of noteworthy paintings, elegant glassware, and artistic statues of artists of the British Raj, it is one of the best restored royal family palaces in India.

Without visiting the ‘Harbour Bridge of India’, the Howrah Bridge, a Kolkata sightseeing tour is truly incomplete. The Howrah Bridge was built over the Hooghly river to ensure connectivity between the two major cities of Kolkata and Howrah, titled as the oldest but the busiest place in Kolkata.

Tagore’s house is one of the most important historical places in Kolkata, also known as the ‘Jorasanko Thakur Bari’. It was the former residence of India’s most renowned literaries, Rabindranath Tagore, which is now converted into a museum, housing Tagore’s literary works, a photo gallery and fascinating paintings.

Best places to stay in Kolkata:

Often voted the top luxury hotel in India, it is one of the best luxury hotel in Kolkata with a central location, The Oberoi Grand is the place to stay if you want to spend some time while your stay in India. This elegant hotel has a prime central location on Jawaharlal Nehru Road, which is close to the shopping in New Market and nightlife of Park Street, housed in a palatial villa dating back to the 1880s.

The people familiar with Kolkata’s history knows that the landmark Park Hotel is over four decades old. Opened in 1967, you wouldn’t know it from looking at the hotel though. It is the most happening hotel in Kolkata, a real entertainment destination with multiple restaurants, nightclubs, cafes, pub, and bar.

A recently renovated hotel and a lesser known, Sapphire Suites is centrally situated on Lindsay Street opposite to the city’s famous New Market which is perfect for bargain shopping. Decorated in minimalist black and white, it has 29 contemporary rooms. The cheapest rooms are on the smaller side and are very decent, as the  best rooms are spacious and overlook the clock tower.

The renowned 215 year old family-owned Fairlawn Hotel is unique. And it’s certain that you won’t come across another hotel like it. The hotel’s rich history, colonial charm, quirky nature and leafy green setting make it sought after by those who appreciate the unusual. It’s likely that you’ll enjoy staying at the Fairlawn, if you don’t mind a few idiosyncrasies.

Blending old-world charm with new-age facilities, the Victorian-style Astor was built in 1905 and recently renovated. The owners have aimed to keep the hotel’s heritage alive, although the rooms are contemporary and modern. Only 10 minutes from Park Street, it has a convenient location on Shakespeare Sarani.

Best places to eat in Kolkata:

The best time to come early in the morning before everything is sold out. Strings of Chinese sausage, Momos, pao, dimsums, and various other delectable treats are sold by vendors to make your breakfast experience exceptionally memorable.

The Jewish community is a must-visit in the city which is iconic remnant of Kolkata’s dwindling for a sweet treat you can’t forget in a lifetime. This place is home to rumballs, brownies, pastries and biscuits. Do try the lemon puffs or jam tarts if you’re looking for something light.

Head behind the heritage hotel, Oberoi Grand, if you’re still feeling hungry and find yourself at Regent, which doesn’t look as noble as the name suggests. The main star of this establishment is the Kabiraji cutlet and their mutton biryani is worth a try and, a fried slice of fish served with chips. This can be called as an Indian alternative to the English Fish n’ Chips.

Kewpies is the place to go to for an authentic Bengali meal  if you don’t have someone make you a home-cooked meal. Feast on the absolutely traditional Daab Chingri, Malai curry chingri and Mangsho which is served in terracotta utensils.