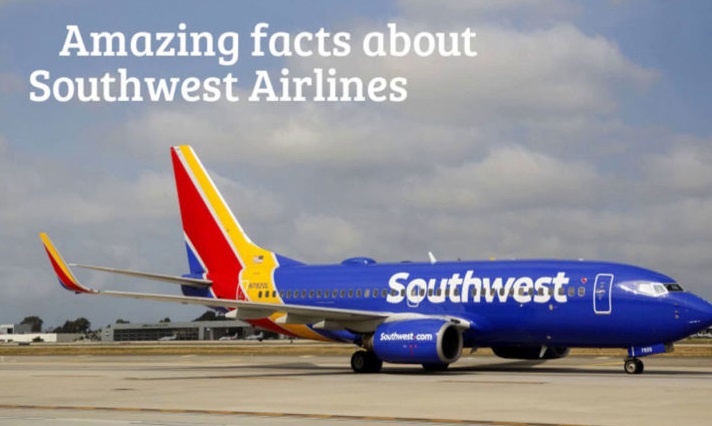 The most interesting fact about the “Southwest Airlines” wasn’t the original name of the airline always. Until 1971, the airline was known by the name of “Air Southwest”.

A year after i.e. in the year 1972, the Southwest airline had to sell one of its four Boeing 737s in order to cover payroll.

After that, the airline continued their operations of 4-aircraft schedule with 3 aircraft only. Then the carrier follows the “10-minute turn” to make the schedule work.

4) INCLUDE ONLY A FEW DESTINATIONS BEFORE:-

Till 1975, Southwest carrier only regulates its operations to destinations like Dallas, Houston, and San Antonio.

In the year 1984, Southwest took delivery of the very first Boeing 737-300. After that, the airline continued to operate more 737-300s which were more than any other airline in the world.

In 1992, the airline acquired Morris Air. And the interesting story attached to it is that one of the founders of Morris Air was David Neeleman who later on starts JetBlue Airways.

Southwest was one of the first airlines to have a website and that is known by the name of “Southwest Airlines Home Gate”. It introduced it in the year 1995.

In 2008, Southwest Airline teamed with Pratt and Whitney who developed a pressure-washing system which let the carrier to clean its engine turbine blades at the gate only. But the main fact linked to it is that this whole technique improves the fuel efficiency by 1.9% with the system.

One of the best features of the airline is that it is the largest “point to point” operator in the US. This is the reason why the airline has its 80 percent of the passengers as locals and only around 20 percent are linked to the connecting flight.

10) ONE OF LARGEST OPERATOR OF BOEING:-

Currently, Southwest is one of the world’s largest operators of Boeing 737s and supports 614 aircraft in service.

1.> What is unique about Southwest Airlines?

2.> Why is Southwest so popular?

ANS:- Southwest airlines are quite popular among travelers and one of the reasons is its affordable flight tickets. If you are looking for affordable flight journey, there is no better option than Southwest Airlines as it offers fares at a comparatively reasonable price.

3.> Why is Southwest so expensive?

ANS:- Because it is a popular airline for business travelers. In large part this is due to being able to change your flight without a fee. This was among the principal reasons I fly them often for work. The change fees on other airlines are so out of control, they’re often more than the fare itself.