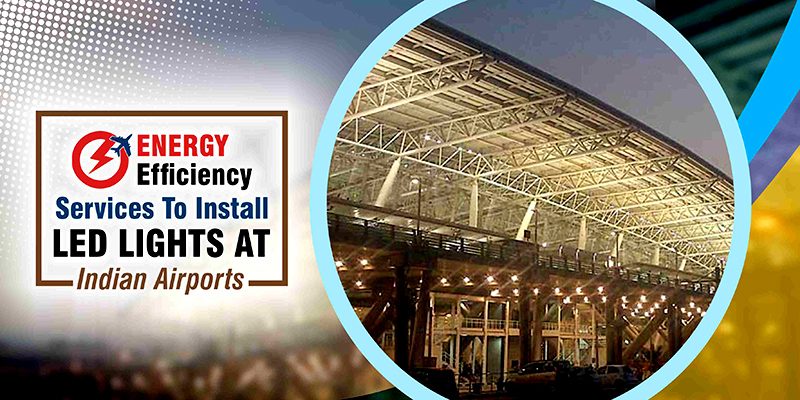 EESL i.e. Energy Efficiency Services Limited has just signed a Memorandum of Understanding with the Airports Authority of India regarding the installation of energy-efficient LED lights at airports and buildings.

EESL is a joint venture of PSUs under the Ministry of Power. The estimated investment for the overall project is around Rs 24.41 Crore.

The Purchase of the lighting equipment, installation, and maintenance, etc will be undertaken by EESL only. From the date of signing a definitive Energy Performance Agreement, the project will be completed within 4 months.

Under the Memorandum of Understanding, EESL will execute the energy efficiency program on ESCO model where the entire upfront investment is borne by EESL. Along with that, EESL will take the responsibility of replacement and repair for the contract period of five years.

Saurabh Kumar (MD of EESL) said that Replacement of existing conventional light fittings with energy-efficient LEDs across airports and buildings of AAI will contribute significantly to India’s climate goals.

Except for the Aviation market, EESL has also partnered with several institutions such as the Indian Railways, Central Public Works Department, Delhi Metro Rail Corporation etc for the same purpose. It aims to replace inefficient lighting and cooling appliances with efficient equipment.

With this, the overall savings through 508 completed building projects across India are estimated to be over Rs 41 crore. Right now, the program is being implemented at 2862 buildings and will be completed by March 31, 2018.

EESL has also planned to bring in the investment of around Rs 1,000 crore covering more than 10,000 large government and private buildings by 2020. This will lead to energy savings of 100 crore kWh per year.

Which Is The Best Time To Grab Flight Ticket Deals To India?

List Of Best Airlines To Fly To India From USA!